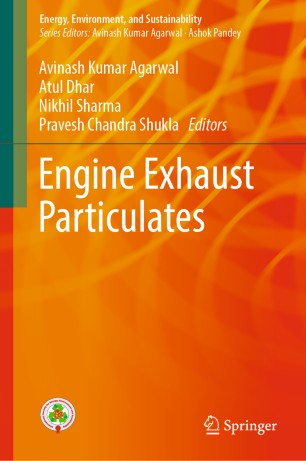 This book provides a comparative analysis of both diesel and gasoline engine particulates, and also of the emissions resulting from the use of alternative fuels.  Written by respected experts, it offers comprehensive insights into motor vehicle particulates, their formation, composition, location, measurement, characterisation and toxicology. It also addresses exhaust-gas treatment and legal, measurement-related and technological advancements concerning emissions.  The book will serve as a valuable resource for academic researchers and professional automotive engineers alike.

Avinash K Agarwal is a Professor at the Department of Mechanical Engineering at Indian Institute of Technology Kanpur. His areas of interest are IC engines, combustion, alternative fuels, conventional fuels, optical diagnostics, laser ignition, HCCI, emission and particulate control, and large bore engines. He has published 24 books and 230+ international journal and conference papers. Prof. Agarwal is a Fellow of the SAE (2012), ASME (2013), ISEES (2015) and INAE (2015). He has received several awards such as the prestigious Shanti Swarup Bhatnagar Award in Engineering Sciences (2016), Rajib Goyal Prize (2015), and NASI-Reliance Industries Platinum Jubilee Award (2012).

Atul Dhar has been an Assistant Professor at the IIT Mandi since 2013. He received his MTech and PhD from the Department of Mechanical Engineering, IIT Kanpur in 2006 and 2013, respectively. He was awarded the European Union Erasmus Mundus Fellowship in 2013 and the Young Scientist Award from the International Society for Energy, Environment and Sustainability in 2015. He has edited 3 books, and published 12 book chapters and more than 35 international peer-reviewed journal papers.

Nikhil Sharma is a scientist at the Engine Research Laboratory, IIT Kanpur, India. He received his MTech in Mechanical Engineering from the NIT Hamirpur, India in 2012 and his PhD from the IIT Kanpur in 2017. A former Assistant Professor at Amity University’s Department of Mechanical and Automation Engineering, Noida, his areas of research include alternative fuels for IC engines (biodiesel, alcohols), emission control and particulate characterisation.

Pravesh Chandra Shukla is an Assistant Professor at the Department of Mechanical Engineering, IIT Bhilai. After completing his PhD at the IIT Kanpur, he worked as a postdoc at Lund University, Sweden. His research interests include internal combustion engines, alternative fuels (biodiesel, alcohols, HVO), diesel emissions and their control, unregulated emissions from diesel and gasoline engines, after-treatment devices, and fuel spray and its characterisation. He has authored 25 research publications and 2 book chapters.