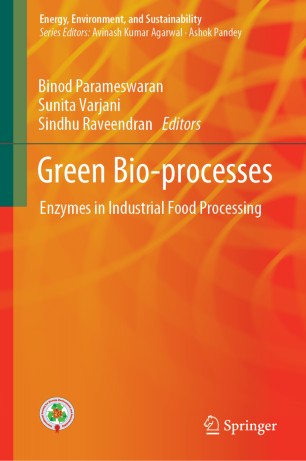 This volume discusses recent advancements to the age old practice of using microbial enzymes in the preparation of food. Written by leading experts in the field, it discusses novel enzymes and their applications in the industrial preparation of food to improve taste and texture, while reducing cost and increasing consistency. This book will be of interest to both researchers and students working in food technology.

Binod Parameswaran (PhD) is a Scientist in the Microbial Processes and Technology Division at the CSIR- National Institute for Interdisciplinary Science and Technology, Kerela, India. He obtained his PhD in Biotechnology from Kerala University, Trivandrum in 2008 and then completed his postdoctoral studies in the area of lignocellulosic biofuels at the Korea Institute of Energy Research, Daejeon, South Korea. He has authored more than a hundred journal articles and 34 chapters. In 2001 he received the Young Scientist Award from the International Forum on Industrial Bioprocesses (IFIBiop) and in 2014 he received the Kerala State Young Scientist Award.
Dr. Sunita Varjani is a scientific officer at Gujarat Pollution Control Board, Gandhinagar, India. She holds an M.Sc. degree in Microbiology (2009) and Ph.D. in Biotechnology (2014). Her major areas of research are industrial and environmental microbiology/biotechnology and molecular biology. Dr. Varjani has authored 35 publications and has won several awards and honours, including the Young Scientist Award at the AFRO-ASIAN Congress on Microbes for Human and Environmental Health, New Delhi (2014) and Best Paper Awards for oral presentations at national and international conferences in 2008, 2012 and 2013. She is a member of the editorial board of the Journal of Energy and Environmental Sustainability.
Sindhu Raveendran is a Scientist at the Centre for Biofuels, Microbial Processes and Technology Division, CSIR -National Institute for Interdisciplinary Science  and Technology, India. She has done her PhD in Biotechnology from the School of Biosciences, Mahatma Gandhi University, Kottayam, India. Her research interests  include producing bioethanol from lignocellulosic biomass, and working with microbial enzymes, biopolymers and metagenomics. She has authored more than 130 research publications, which include 75 journal articles and 15 book chapters, and has been the recipient of many prestigious awards and fellowships, including the Marie Curie Fellowship, Visiting Fellowship at EPFL, Switzerland etc.