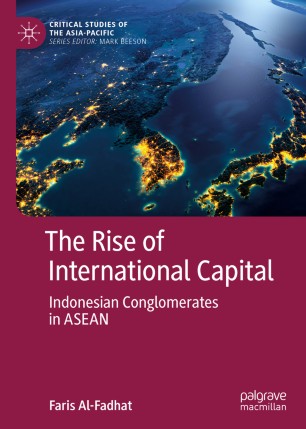 The Rise of International Capital

This book analyzes the social forces and political coalitions driving regional integration projects in Asia with a focus on ASEAN and Indonesian conglomerates. It asks which social forces within the domestic political economy of Asian states are driving governments to seek regional arrangements for economic governance. In particular, the book considers how the emergence, reorganization, and expansion of capitalist class have conditioned political support for regional economic integration. By addressing these issues, the book emphasizes that the wellspring of regional economic institution projects stem from the process of capitalist development and the social forces it has unleashed. The book’s aims place the social and class relations that underpin regional projects—rather than the institutions which result from them—at the centre of the analysis of regional integration. The research for this account draws mainly on primary documents from archival and field research conducted by the author, including company documents and in-depth interviews, government reports and policies, and trade publications and data sources, which is supplemented with secondary sources where relevant.
Faris Al-Fadhat is a Lecturer at the Department of International Relations, Faculty of Social and Political Sciences, Universitas Muhammadiyah Yogyakarta, Indonesia and an associate at the Asia Research Centre, Murdoch University, Australia.

Faris Al-Fadhat is a Lecturer in the Department of International Relations at the Faculty of Social and Political Sciences, Universitas Muhammadiyah Yogyakarta, Indonesia and an associate at the Asia Research Centre, Murdoch University, Australia.

“This book makes a valuable contribution to the literature on regional economic integration and regional economic governance through its case study of the ASEAN Economic Community project using a social relations approach. Faris Al-Fadhat shows, persuasively, that regional economic governance is best understood through the lens of the internationalization of capital, state transformation and social conflict. The work’s originality lies in building on and advancing earlier political economy works on ASEAN economic cooperation and integration that emphasized the importance of domestic social forces in shaping the form and outcomes of regional governance.” (Professor Helen E S Nesadurai, Monash University, Malaysia Campus)

“This book makes an important contribution to leading debates within political economy by explaining how evolving interests under late capitalism are intertwined with the emergence of novel patterns of governance in Southeast Asia. Faris Al-Fadhat’s book demonstrates how well-positioned and increasingly-internationalised fractions of capital had a distinct interest in delinking from their national confines and required a certain institutional architecture to be in place, at multiple levels, for this to happen. I am aware of no contemporary study of Southeast Asia or – more specifically – of Indonesia that has come close to what Al-Fadhat has achieved with this book.” (Associate Professor Toby Carroll, City University of Hong Kong)

“Proposing a new theoretical framework for understanding regional economic governance, this book eschews the problem-solving orientation of liberal and realist perspectives in favour of an approach that emphasizes the social foundations of state behaviour. This framework differs from much other work on the political economy of Southeast Asia—in particular work that has a national focus—by emphasizing the internationalization of capital, the emergence of internationalized fractions of capital, and their attendant effects on the region’s governance. Faris Al-Fadhat provides an original and innovative analysis that makes an important contribution to our understanding of the region’s political economy and the Indonesian state.” (Professor Andrew Rosser, The University of Melbourne, Australia)