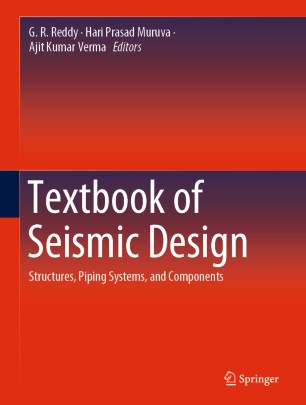 This book focuses on the seismic design of Structures, Piping Systems and Components (SSC). It explains the basic mechanisms of earthquakes, generation of design basis ground motion, and fundamentals of structural dynamics; further, it delves into geotechnical aspects related to the earthquake design, analysis of multi degree-of-freedom systems, and seismic design of RC structures and steel structures. The book discusses the design of components and piping systems located at the ground level as well as at different floor levels of the structure. It also covers anchorage design of component and piping system, and provides an introduction to retrofitting, seismic response control including seismic base isolation, and testing of SSCs. The book is written in an easy-to-understand way, with review questions, case studies and detailed examples on each topic. This educational approach makes the book useful in both classrooms and professional training courses for students, researchers, and professionals alike.

G R Reddy is a Senior Professor at Homi Bhabha National Institute, Teacher for Ph.Ds, in University of Mumbai and Outstanding Scientist at Bhabha Atomic Research Centre, Mumbai. His research expertise is in the areas of structural dynamics and earthquake engineering. He has contributed in developing simple numerical modeling techniques for complex structures, structure-equipment interaction due to earthquakes, stochastic methods of analysis, dynamic sub-structuring techniques etc. He was involved in developing seismic hazards at various sites of nuclear facilities. He has mastered seismic response control methods and developed passive response control devices including seismic base isolators which will eliminate snubbers in nuclear facilities and reduce the initial cost, maintenance cost and improve the safety. He has developed simple seismic design procedures for equipment and piping supported on hysteretic supports. As a part of developing more realistic design procedures, he has performed large number of experiments on beam-column joints, frames and piping systems till collapse. He was involved in developing methodology for seismic margins assessment in piping systems and structures. For the purpose of life extension of the existing facilities, he has evolved methods for performing seismic retrofitting of structures using dampers, FRP, steel jacketing. He contributed significantly in analysis and design/requalification/retrofit of structures, piping systems and components of old and new nuclear facilities. In addition he contributed in the design of a 30 m antenna for the Chandrayan project and of a large-scale gamma ray telescope. He has regularly given lectures on vibrations and earthquake engineering in training schools of Department of Atomic Energy , involved in IS &departmental seismic code committees. He guided large number of M.Tech and PhD students and has authored more than 500 research publications.
Hari Prasad Muruva is a Scientist at Bhabha Atomic Research Centre, Mumbai. His research primarily focuses on Risk and Reliability Analysis, Probabilistic Safety Assessment (PSA), Seismic PSA, Probabilistic Seismic Hazard Analysis (PSHA) and Risk Based Inspection of Power Plants. He has collaborated on several national and international projects and has authored more than 50 research publications.
Ajit Kumar Verma is a Professor (Technical Safety), Western Norway University of Applied Sciences, Haugesund, Norway, and has previously worked at IIT Bombay as a Professor, was an adjunct at the University of Stavanger, has been a Guest Professor at the Lulea University of Technology, Sweden. His publications include 3 edited volumes, 5 monographs and more than 250 research articles in journals and conferences. He was the EIC of OPSEARCH, and is the EIC of Journal of Life Cycle Reliability and Safety Engineering and Founder Editor-in-Chief of the International Journal of Systems Assurance Engineering and Management. He is also the Springer series editor of three book series.