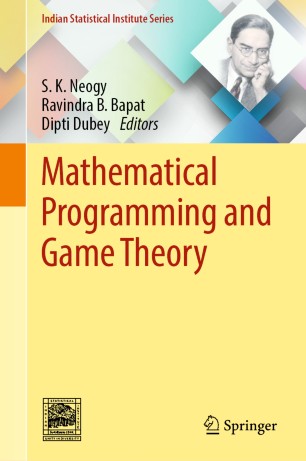 S.K. NEOGY is Professor at the Indian Statistical Institute, New Delhi. A Ph.D. from the same institute, his primary area of research is mathematical programming and game theory. He is co-editor of books: Modeling, Computation and Optimization, Mathematical Programming and Game Theory for Decision Making (both from World Scientific). He is has also been a co-editor of the special issue of several journals: Annals of Operations Research, entitled Optimization Models with Economic and Game Theoretic Applications (2016), International Game Theory Review, entitled Operations Research and Game Theory (2001), and Applied Optimization and Game-Theoretic Models, Parts I and II (2015). He has published widely in several international journals of repute like Mathematical Programming, Linear Algebra and its Applications, OR Spektrum, SIAM Journal on Matrix Analysis and Applications, SIAM Journal on Optimization, International Journal of Game Theory, Dynamic Games and Applications, Annals of Operations Research, and Mathematical Analysis and Applications. He is a reviewer of zbMATH and Mathematical Reviews.
RAVINDRA B. BAPAT, Ph.D. from the University of Illinois at Chicago, is Professor at the Stat-Math Unit, Indian Statistical Institute, New Delhi. He had his schooling and undergraduate education in Mumbai. He obtained his B.Sc. degree from the University of Mumbai, and M.Stat. from the Indian Statistical Institute, New Delhi. After spending one year in Northern Illinois University in DeKalb, Illinois, and two years at the Department of Statistics, University of Mumbai, Professor Bapat joined the Indian Statistical Institute, New Delhi, in 1983. He held visiting positions at various universities in the U.S.A. and visited several institutes abroad in countries including France, Holland, Canada, China and Taiwan for collaborative research and seminars. The main areas of research interest of Professor Bapat are nonnegative matrices, matrix inequalities, matrices in graph theory and generalized inverses. He has published more than 100 research papers in these areas in reputed national and international journals and guided several Ph.D. students. He has written books on Linear Algebra (co-published by Hindustan Book Agency, Springer and Cambridge University Press). He wrote a book on mathematics for the general reader, in Marathi, which won the state government award for 2004 for the Best Literature in Science.
Professor Bapat has been on the editorial boards of Linear and Multilinear Algebra, Electronic Journal of Linear Algebra, Indian Journal of Pure and Applied Mathematics and Kerala Mathematical Association Bulletin. He has been elected Fellow of the Indian Academy of Sciences, Bangalore, and the Indian National Science Academy, New Delhi. Professor Bapat served as the president of the Indian Mathematical Society during its centennial year 2007–2008. For the past several years, he has been actively involved with the Mathematics Olympiad Program in India and served as the national coordinator for the program. Professor Bapat served as the head, Indian Statistical Institute, Delhi Centre, during 2007–2011. He was awarded the J.C. Bose Fellowship in 2009.
DIPTI DUBEY is a post-doctoral fellow at the Indian Statistical Institute, New Delhi. A Ph.D. from the Indian Institute of Technology Delhi, her primary area of research is mathematical programming and game theory. She has published widely in several international journals of repute like Linear Algebra and Its Applications, Linear and Multilinear Algebra, Annals of Operations Research, Dynamic Games and Applications, Operations Research Letters and Fuzzy Sets and Systems. She is a reviewer of many international journals on optimization and Math reviews.