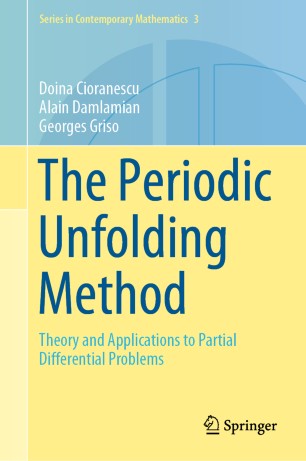 This is the first book on the subject of the periodic unfolding method (originally called "éclatement périodique" in French), which was originally developed to clarify and simplify many questions arising in the homogenization of PDE's. It has since led to the solution of some open problems.

Written by the three mathematicians who developed the method, the book presents both the theory as well as numerous examples of applications for partial differential problems with rapidly oscillating coefficients: in fixed domains (Part I), in periodically perforated domains (Part II), and in domains with small holes generating a strange term (Part IV).  The method applies to the case of multiple microscopic scales (with finitely many distinct scales) which is connected to partial unfolding (also useful for evolution problems). This is discussed in the framework of oscillating boundaries (Part III).  A detailed example of its application to linear elasticity is presented in the case of thin elastic plates (Part V).  Lastly, a complete determination of correctors for the model problem in Part I is obtained (Part VI).

This book can be used as a graduate textbook to introduce the theory of homogenization of partial differential problems, and is also a must for researchers interested in this field.