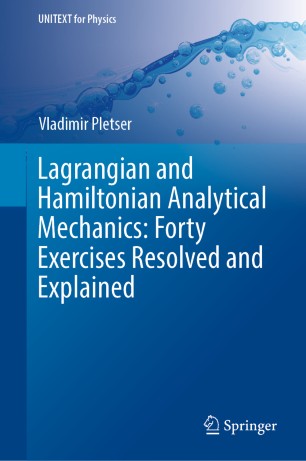 This textbook introduces readers to the detailed and methodical resolution of classical and more recent problems in analytical mechanics. This valuable learning tool includes worked examples and 40 exercises with step-by-step solutions, carefully chosen for their importance in classical, celestial and quantum mechanics.
The collection comprises six chapters, offering essential exercises on: (1) Lagrange Equations; (2) Hamilton Equations; (3) the First Integral and Variational Principle; (4) Canonical Transformations; (5) Hamilton – Jacobi Equations; and (6) Phase Integral and Angular Frequencies
Each chapter begins with a brief theoretical review before presenting the clearly solved exercises. The last two chapters are of particular interest, because of the importance and flexibility of the Hamilton-Jacobi method in solving many mechanical problems in classical mechanics, as well as quantum and celestial mechanics.
Above all, the book provides students and teachers alike with detailed, point-by-point and step-by-step solutions of exercises in Lagrangian and Hamiltonian mechanics, which are central to most problems in classical physics, astronomy, celestial mechanics and quantum physics.

Vladimir Pletser earned his M. Eng. in Mechanics in 1979, M.Sc. in Geophysics in 1980 and a Ph.D. in Astrophysics in 1990, all at the University of Louvain, Belgium.
Since 2018, he is Director for Space Training Operations at Blue Abyss, a company based in the United Kingdom and proposing a new approach for astronaut training.
From 2016 till 2018, he has been a visiting professor – scientific adviser at the Chinese Academy of Sciences in Beijing’s Technology and Engineering Centre for Space Utilization, supporting the preparation and development of microgravity research instrumentation for parabolic flights and for the future Chinese Space Station.
He previously worked for 30 years as a senior physicist – engineer at the European Space Research and Technology Centre (ESTEC) of the European Space Agency (ESA), where he was in charge of developing scientific instruments for microgravity research in fluid physics, crystallisation of proteins and zeolites and on dexterous manipulation on board the International Space Station.
At ESA he was also responsible for the aircraft parabolic flight microgravity research programme and he logged more than 7350 parabolas, representing almost 40 hours of weightlessness, equivalent to 26 Earth orbits, and 53 min and 50 min at Mars and Moon g levels, during which he participated in several hundred experiments in physical and life sciences. He holds the official Guinness World Record for the number of airplanes (12) on which he has flown parabolas. He was a flight instructor for public for discovery parabolic flights.
An astronaut candidate for Belgium since 1991, he was payload specialist candidate for several spacelab missions, including Spacelab LMS for which he spent two months in training at NASA-JSC, Houston in 1995. He was an astronaut training instructor for parabolic flights for ESA astronauts and for NASA and DLR astronauts for several spacelab missions.
In 2001, he was selected by The Mars Society, a private organisation promoting the human exploration of Mars, to participate in three international Mars mission simulations: in the Arctic Circle in 2001 and in the Desert of Utah in 2002 and as crew commander in 2009.
He is visiting professor at 20 universities in Europe, USA, Canada, Africa, Israel, and China. He has more than 600 publications, including 13 books and book chapters, 60 articles in refereed journals and 130 articles in international conferences proceedings. He has given more than 600 presentations and conferences. He is a member of the International Astronautical Academy and of several other academies and scientific organisations.