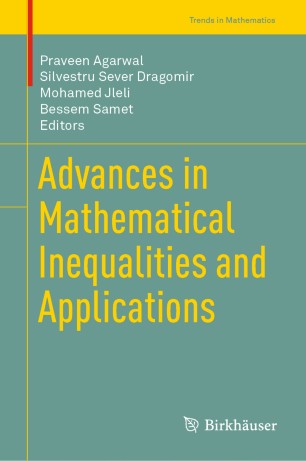 Advances in Mathematical Inequalities and Applications

This book is a collection of original research and survey articles on mathematical inequalities and their numerous applications in diverse areas of mathematics and engineering. It includes chapters on convexity and related concepts; inequalities for mean values, sums, functions, operators, functionals, integrals and their applications in various branches of mathematics and related sciences; fractional integral inequalities; and weighted type integral inequalities. It also presents their wide applications in biomathematics, boundary value problems, mechanics, queuing models, scattering, and geomechanics in a concise, but easily understandable way that makes the further ramifications and future directions clear. The broad scope and high quality of the contributions make this book highly attractive for graduates, postgraduates and researchers. All the contributing authors are leading international academics, scientists, researchers and scholars.

PRAVEEN AGARWAL is a professor at the Department of Mathematics, Anand International College of Engineering, Jaipur, India. He has published over 130 articles on special functions and fractional calculus in several leading mathematics journals, such as Applied Mathematics and Computation, the Journal of Nonlinear Science and Applications, and the Journal of Inequalities and Applications. Recently, his research has focused on partial differential equations and fractional differential equations. He has been on the editorial boards of a number of journals, including the Maejo International Journal of Science and Technology. He has been involved in various conferences and has also been awarded numerous international research grants, such as the Research in Group by the International Centre for Mathematical Sciences and the World Academy of Sciences Visiting Scientist fellowship.

MOHAMED JLELI is a full professor of mathematics at King Saud University, Saudi Arabia. He obtained his PhD degree in pure mathematics entitled “Constant mean curvature hypersurfaces” from the Faculty of Sciences of Paris 12, France, in 2004. He has written several papers on differential geometry, partial differential equations, evolution equations, fractional differential equations and fixed point theory. He is on the editorial board of various international journals and acts as a referee for a number of international journals in mathematics.

BESSEM SAMET is a full professor of applied mathematics at King Saud University, Saudi Arabia. He obtained his PhD degree in applied mathematics entitled “Topological derivative method for Maxwell equations and its applications” from Paul Sabatier University, France, in 2004. His research interests include various branches of nonlinear analysis, such as fixed-point theory, partial differential equations, differential equations, and fractional calculus. He is the author/coauthor of more than 100 papers published in ISI journals. He was included in the Thomson Reuters list of Highly Cited Researchers for 2015 and 2016.