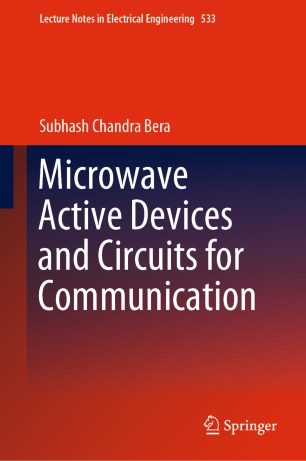 The book discusses active devices and circuits for microwave communications. It begins with the basics of device physics and then explores the design of microwave communication systems including analysis and the implementation of different circuits. In addition to classic topics in microwave active devices, such as p-i-n diodes, Schottky diodes, step recovery diodes, BJT, HBT, MESFET, HFET, and various microwave circuits like switch, phase shifter, attenuator, detector, amplifier, multiplier and mixer, the book also covers modern areas such as Class-F power amplifiers, direct frequency modulators, linearizers, and equalizers. Most of the examples are based on practical devices available in commercial markets and the circuits presented are operational. The book uses analytical methods to derive values of circuit components without the need for any circuit design tools, in order to explain the theory of the circuits. All the given analytical expressions are also cross verified using commercially available microwave circuit design tools, and each chapter includes relevant diagrams and solved problems. It is intended for scholars in the field of electronics and communication engineering.

Subhash Chandra Bera received his B.Sc. degree (with honors) in Physics from Presidency College, Calcutta, and B.Tech. and M.Tech. degrees in Radio Physics and Electronics from the Institute of Radio Physics and Electronics, University of Calcutta. He also received a Ph.D. degree in Microwave and Antenna Engineering from Gujarat University, India. Since 1994, Dr. Bera has been with the Space Applications Centre, Indian Space Research Organization (ISRO), Ahmedabad, India, where he has been involved in the design and development of microwave circuits and systems for various INSAT & GSAT series of communication payload projects as well as GAGAN/IRNSS navigation payload projects. He has developed several state-of-the-art microwave subsystems that are operational in various Indian national satellites. His research interests include microwave active circuits in general and solid-state power amplifiers, channel amplifiers, linearizers, limiters, attenuator and equalizers, in particular for spacecraft use. Currently he is Division Head of Satcom and Navigation Systems Engineering Division, Space Applications Centre (ISRO), Ahmedabad and Associate Project Director of GSAT-24 & GSAT-31 Communication Payloads. He has authored about 25 research publications in international journals and presented numerous papers at national and international conferences and symposiums. He has also delivered invited talks in the field of microwave active devices and circuits at various workshops and symposiums. He has also been granted four patents.