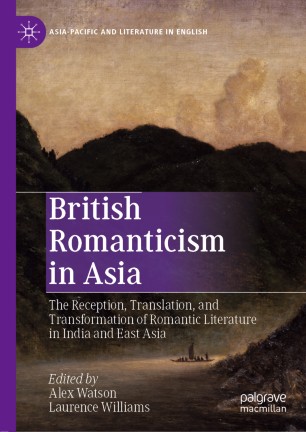 The Reception, Translation, and Transformation of Romantic Literature in India and East Asia

This book examines the reception of British Romanticism in India and East Asia (including Japan, China, Korea and Taiwan). Building on recent scholarship on 'Global Romanticism', this book develops a model for a more reciprocal and cross-cultural model of scholarship, in which 'Asian Romanticism' is recognised as an important part of the Romantic literary tradition.  It explores the connections between canonical British Romantic authors (including Austen, Blake, Byron, Shelley, and Wordsworth) and prominent Asian writers (including Nehru, Ōe, Sōseki, Tagore and Zhimo). In addition, this study challenges Eurocentric assumptions about literary reception and periodisation, focusing on how, from the early nineteenth century, British Romanticism was creatively adapted and transformed by writers in a number of Asian nations.

Alex Watson is Associate Professor of Comparative Literature and Critical Theory at Nagoya University, Japan, and the author of Romantic Marginality: Nation and Empire on the Borders of the Page (2012).

Laurence Williams is Associate Professor of English at Sophia University, Japan. He holds a DPhil from Oxford and has previously held Canadian Commonwealth and Japan Society for the Promotion of Science research fellowships.

“For Romanticists working in Asia, or dealing with the international impact of Romanticism, it will be essential reading.” (David Chandler, Essays in English Romanticism, Vol. 44, 2020)