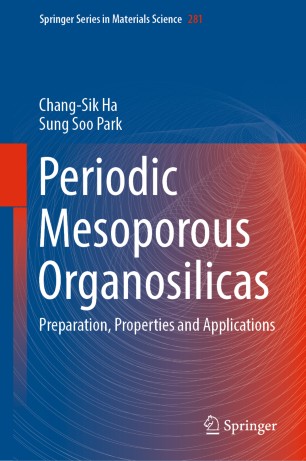 This book provides a comprehensive overview of the fundamental properties, preparation routes and applications of a novel class of organic–inorganic nanocomposites known as periodic mesoporous organosilicas (PMOs).

Mesoporous silicas are amorphous inorganic materials which have silicon and oxygen atoms in their framework with pore size ranging from 2 to 50 nm. They can be synthesized from surfactants as templates for the polycondensation of various silicon sources such as tetraalkoxysilane. In general, mesoporous silica materials possess high surface areas, tunable pore diameters, high pore volumes and well uniformly organized porosity. The stable chemical property and the variable ability for chemical modification makes them ideal for many applications such as drug carrier, sensor, separation, catalyst, and adsorbent. Among such mesoporous silicas, in 1999, three groups in Canada, Germany, and Japan independently developed a novel class of organic–inorganic nanocomposites known as periodic mesoporous organosilicas (PMOs). The organic functional groups in the frameworks of these solids allow tuning of their surface properties and modification of the bulk properties of the material.

The book discusses the properties of PMOs, their preparation, different functionalities and morphology, before going on to applications in fields such as catalysis, drug delivery, sensing, optics, electronic devices, environmental applications (gas sensing and gas adsorption), biomolecule adsorption and chromatography. The book provides fundamental understanding of PMOs and their advanced applications for general materials chemists and is an excellent guide to these promising novel materials for graduate students majoring in chemical engineering, chemistry, polymer science and materials science and engineering.

Chang-Sik Ha is a professor at the Department of Polymer Science and Engineering, Pusan National University (PNU), Korea since 1982. He received his PhD in Chemical Engineering from Korea Advanced Institute of Science and Technology(KAIST), Seoul, Korea in 1987. He served as a Vice President of PNU, Director of the Pioneer Research Center for Nanogrid Materials, the Honorary Professor of University of Queensland, Australia, and Associate Editor of both the Advanced Porous Materials and the Composite Interfaces. He was appointed as the University Distinguished Professor in 2016. He has been elected as the members of both the Korea Academy of Science and Technology and the National Engineering Academy of Korea in 2004. He published over 750 papers in peer-reviewed journals, 70 patents, and 24 book or book chapters. He received several honorable awards including Samsung Polymer Science Award from the Polymer Society of Korea(2011) and the SPSJ International Award from the Society of Polymer Science, Japan(2017). His research interests include periodic mesoporous organosilicas (PMOs), organic–inorganic nanohybrid materials and functional polymers for various applications.

Sung Soo Park is a research professor in Pusan National University (PNU), Korea since 2003. He received his PhD (in 2002) in Chemistry from Inje University, Korea. Before he joined PNU, he was a postdoctoral research fellow in Korea Advanced Institute of Science and Technology, Korea in 2002. He published over 80 papers in peer-reviewed journals and 25 patents. His main research interests include periodic mesoporous organosilica materials and organic–inorganic hybrid nanocomposites for application in the area of drug delivery, photosensing, and adsorption of gas and metal ions.