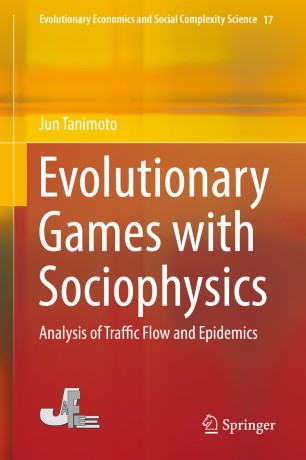 Analysis of Traffic Flow and Epidemics

Recent applications of evolutionary game theory in the merging fields of the mathematical and social sciences are brilliantly portrayed in this book, which highlights social physics and shows how the approach can help to quantitatively model complex human–environmental–social systems.

First, readers are introduced to the fundamentals of evolutionary game theory. The two-player, two-strategy game, or the 2 × 2 game, is presented as an archetype to help understand the difficulty of cooperating for survival against defection in common social contexts. Subsequently, the book explains the theoretical background of the multi-player, two-strategy game, which may be more widely applicable than the 2 × 2 game for social dilemmas. The latest applications of 2 × 2 games are also discussed to explore how integrated reciprocity mechanisms can solve social dilemmas.

In turn, the book describes two practical areas in which evolutionary game theory has been applied. The first concerns traffic flow analysis. In conventional interpretations, traffic flow can be understood by means of fluid dynamics, in which the flow of vehicles is evaluated as a continuum body. Such a simple idea, however, does not work well in reality, particularly if a driver’s decision-making process is considered. Various dilemmas involve complex structures that depend primarily on traffic density, a revelation that should help establish a practical solution for reducing traffic congestion.

Second, the book provides keen insights into how powerful evolutionary game theory can be in the context of epidemiology. Both approaches, quasi-analytical and multi-agent simulation, can clarify how an infectious disease such as seasonal influenza spreads across a complex social network, which is significantly affected by the public attitude toward vaccination. A methodology is proposed for the optimum design of a public vaccination policy incorporating subsidies to efficiently increase vaccination coverage while minimizing the social cost.