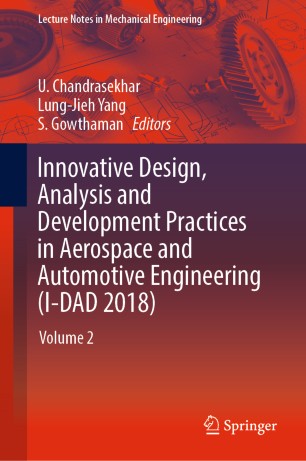 This book gathers the best articles presented by researchers and industrial experts at the International Conference on “Innovative Design and Development Practices in Aerospace and Automotive Engineering (I-DAD 2018)”. The papers discuss new design concepts, analysis and manufacturing technologies, with an emphasis on achieving improved performance by downsizing; improving the weight-to-strength ratio, fuel efficiency, and operational capability at room and elevated temperatures; reducing wear and tear; and addressing NVH aspects, while balancing the challenges of Euro IV/Barat Stage IV emission norms and beyond, greenhouse effects, and recyclable materials. The innovative methods discussed here offer valuable reference material for educational and research organizations, as well as industry, encouraging them to pursue challenging projects of mutual interest.

Dr. U. Chandrasekhar is the Pro Vice Chancellor of Vel Tech Dr. RR & Dr. SR Technical University, Chennai. Previously, he was Director of the Engineering Staff College of India (ESCI), an autonomous organ of the Institution of Engineers (India). Prior to that, he was an Additional Director at a Ministry of Defence R&D organisation called Gas Turbine Research Establishment. For the past 26 years, he has been involved in the design, analysis, prototyping, rapid manufacturing, and testing of aero gas turbine engines. He set up the first-ever rapid prototyping laboratory in the country.
Dr. Chandrasekhar is currently leading a critical technology development project on high-temperature thin film sensors in collaboration with the NRC, Canada, and serves on the council of the Institution of Engineers and National Design and Research Forum. He was also chosen to represent India at the Young Leaders Convention of World Federation of Engineering Organisations at Geneva.
He holds a B.E. in Mechanical Engineering from NIT, Suratkal, an M.Tech. in Design Stream from the IIT, Madras and a Ph.D. from the VTU. For his research efforts, he received a commendation medal from the Scientific Advisor to the Defence Minister, and in recognition of his academic excellence at the IIT Madras, he received an award from former President of India Dr. A. P. J. Abdul Kalam.
Dr. Lung-Jieh Yang received his M.S. degree from Tamkang University, Taiwan in 1991 and his Ph.D. from the Institute of Applied Mechanics, National Taiwan University, Taiwan in 1997. He was a Visiting Associate of Electrical Engineering at Caltech, USA from 2000 to 2001, and is currently a Professor at the Department of Mechanical & Electromechanical Engineering and Director of the Instrument & Experiment Center, Tamkang University, Taiwan. He is also a member of the IEEE and AIAA. His current research interests include flapping micro-aerial-vehicles (MAVs) and gelatin MEMS technology. His research areas are polymer composites, nanomaterials, high-temperature foams, experimental mechanics, and sensors for health monitoring & energy harvesting.
Dr. S. Gowthaman is Director of R&D and an Associate Professor at the Department of Mechanical Engineering, Vel Tech Dr. RR & Dr. SR University. He received his B.E. in Mechanical Engineering from Bharathidasan University (Shanmugha College of Engineering) and his M.S. and Ph.D. in Mechanical Engineering from North Carolina A&T State University, USA. His research activities include polymer-based composite materials, experimental mechanics, nano-engineering and advanced materials for various applications. Before joining Vel Tech University in 2013, Dr. Gowthaman worked at Nanyang Technological University (NTU), Singapore and at the Center for Aviation Safety (CAS) at NC A&T State University (USA). He has worked in research projects sponsored by various agencies like NASA, the US Army, ONR, and Wright Materials Research (all USA), DSTA (Singapore), DST-SERB (India), DRDO-ERIPR (India) and DST-TDT (India). He has collaborated and is collaborating with a number of national and international institutes and research labs. He has published more than 30 research papers in international journals and conference proceedings. He is a member of several committees and societies including AIAA Materials Technical Committee (USA) in 2011, serves as a reviewer for a number of journals including Composites Part A, Journal of Reinforced Plastics and Composites, AIAA Journal and IE Springer Journal, and is a member of the editorial board for international conferences like I-DAD and ICAM-3D. Dr. Gowthaman has received a number of awards from NC A&T State University (USA) and Bharathidasan University for his academic and research achievements, an NTU (Singapore) Post-Doctorate Fellowship and a DST-SERB (India) Early Career Research project award.