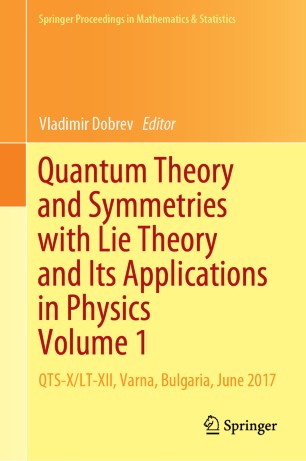 This book is the first volume of proceedings from the joint conference X International Symposium “Quantum Theory and Symmetries” (QTS-X) and XII International Workshop “Lie Theory and Its Applications in Physics” (LT-XII), held on 19–25 June 2017 in Varna, Bulgaria.
The QTS series was founded on the core principle that symmetries underlie all descriptions of quantum systems. It has since evolved into a symposium at the forefront of theoretical and mathematical physics. The LT series covers the whole field of Lie theory in its widest sense, together with its applications in many areas of physics. As an interface between mathematics and physics, the workshop serves as a meeting place for mathematicians and theoretical and mathematical physicists.
In dividing the material between the two volumes, the Editor has sought to select papers that are more oriented toward mathematics for the first volume, and those focusing more on physics for the second. However, this division is relative, since many papers are equally suitable for either volume. The topics addressed in this volume represent the latest trends in the fields covered by the joint conferences: representation theory, integrability, entanglement, quantum groups, number theory, conformal geometry, quantum affine superalgebras, noncommutative geometry. Further, they present various mathematical results: on minuscule modules, symmetry breaking operators, Kashiwara crystals, meta-conformal invariance, the superintegrable Zernike system.