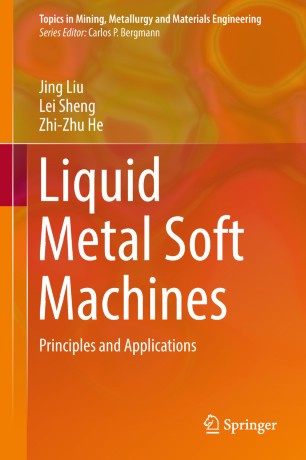 This book discusses the core principles and practical applications of a brand new machine category: liquid-metal soft machines and motors. After a brief introduction on the conventional soft robot and its allied materials, it presents the new conceptual liquid-metal machine, which revolutionizes existing rigid robots, both large and small. It outlines the typical features of the soft liquid-metal materials and describes the various transformation capabilities, mergence of separate metal droplets, self-rotation and planar locomotion of liquid-metal objects under external or internal mechanism. Further, it introduces a series of unusual phenomena discovered while developing the shape changeable smart soft machine and interprets the related mechanisms regarding the effects of the shape, size, voltage, orientation and geometries of the external fields to control the liquid-metal transformers. Moreover, the book illustrates typical strategies to construct a group of different advanced functional liquid-metal soft machines, since such machines or robots are hard to fabricate using rigid-metal or conventional materials. With highly significant fundamental and practical findings, this book is intended for researchers interested in establishing a general method for making future smart soft machine and accompanying robots.

Jing Liu received his double bachelor’s degrees (B.E. in Power Engineering and Control and B.S. in Physics) in 1992, and Ph.D. in Thermal Science with specialty on Bioengineering in 1996, all from Tsinghua University. He then served as assistant professor there, a postdoctoral research associate at Purdue University, and a senior visiting scholar at MIT. He has been a professor of Technical Institute of Physics and Chemistry, Chinese Academy of Sciences (CAS) since July 1999 and a professor of Tsinghua University since August 2008. Dr. Liu works intensively at the interdisciplinary areas among biomedical engineering, mobile health care technology, liquid metal and thermal science. He has made significant contributions to the bioheat transfer area through numerous conceptual innovation, methodology development and technical inventions. Quite a few of his inventions have been translated into clinical uses. Dr. Liu pioneered a group of nonconventional technologies and fundamental scientific discoveries through introducing the room temperature liquid metals into rather diverse areas which successfully initiated many new directions in biomedical engineering, soft machine, chip cooling, advanced manufacture and energy area etc. Among them, his work in adopting liquid metal to electrically connect the severed nerves was especially attributed as “most amazing medical breakthroughs”.
Zhi-Zhu He is an Associate Professor at the Key Laboratory of Cryogenics, and Beijing Key Laboratory of Cryo-Biomedical Engineering, Technical Institute of Physics and Chemistry, Chinese Academy of Sciences (CAS). He received his Ph.D. degree in Thermal Science with specialty in Bioengineering in 2010. He then served as an Assistant Professor there, and become Associate Professor since 2016. He has published 20 peer reviewed journal articles. He works intensively at liquid metal and its wide application in heat transfer and soft machine. He has developed an easy way to generate liquid metal droplets in large quantity, which is important from both fundamental and practical aspects. In addition, he has investigated the transient state machine enabled from colliding and coalescence of a swarm of autonomously running liquid metal motors.
Lei Sheng is an Assistant Professor at the Technical Institute of Physics and Chemistry of the Chinese Academy of Sciences (CAS). He received his B.E. degree in biomedical engineering in 2007 from Hefei University of Technology and Ph.D. in biomedical engineering in 2013 from Beijing University of Technology, then worked as a postdoctoral fellow in Tsinghua University until 2016. Dr. Sheng’s research interests include liquid metal based soft robots, sensors and other applications of liquid metal used in biomedical field. He has being taken charge of doctoral science foundation and participated in a number of National Natural Science Foundation of China and Beijing Natural Science Foundation. His representative papers were published in Advanced Materials, Small, Scientific Reports and other academic publications. Related research achievements were reported by FOX News, New Scientist, MIT Technology Review, CCTV News, the front page of Science China Daily (4 times) and Tsinghua News.