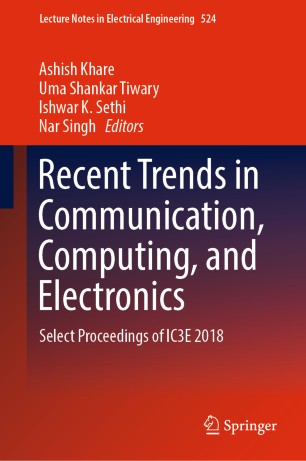 This book presents select papers from the International Conference on Emerging Trends in Communication, Computing and Electronics (IC3E 2018). Covering the latest theories and methods in three related fields – electronics, communication and computing, it describes cutting-edge methods and applications in the areas of signal and image processing, cyber security, human-computer interaction, machine learning, electronic devices, nano-electronics, wireless sensor networks, antenna and wave propagation, and mobile communication. The contents of this book will be beneficial to students, researchers, and professionals working in the field of networks and communications.

Dr. Ashish Khare completed his Master’s in Computer Science and his PhD at the University of Allahabad in 1999 and 2007, respectively. He pursued post-doctoral research at Gwangju Institute of Science and Technology in Korea. Currently, he is working as an Associate Professor at the Department of Electronics and Communication, University of Allahabad, India. His research interests include applications of wavelet transforms computer vision, cyber security and understanding human behavior. He has worked as Principal Investigator for research projects funded by UGC and DST. He has authored three books, and published more than 100 articles in international peer-reviewed journals and conference proceedings.

Dr. Uma Shankar Tiwary obtained his PhD in Electronics Engineering from the Institute of Technology, Banaras Hindu University, Varanasi in 1991. He is currently a Professor at the Indian Institute of Information Technology (IIIT), Allahabad, where he has various academic and administrative responsibilities. His research interests include image processing, language processing, human–computer interaction, and cognitive computing. Dr. Tiwary has published seven books and more than 100 research articles in international journals and conference proceedings. He is also a senior member of IEEE.

Dr. Ishwar K Sethi obtained both his MTech and PhD from the Indian Institute of Technology (IIT), Kharagpur in 1971 and 1978, respectively. Currently, he is a Professor at the Department of Computer Science and Engineering, Oakland University. Prior to joining Oakland University he was with the Wayne State University, IIT Delhi and IIT Kharagpur. His major areas of research include data mining, image and video databases, document image processing, pattern recognition, and machine learning. He has published more than 250 articles in international journals and conference proceedings. He has served on the editorial board of several respected journals and also as a guest editor of numerous conference proceedings. Dr. Sethi is a Fellow of IEEE.

Dr. Nar Singh received his MTech from the University of Allahabad in 1975 and his PhD from Indian Institute of Technology (IIT), Delhi in 1989. Currently, he is a Professor at the Department of Electronics and Communication, University of Allahabad, where he has various academic and administrative responsibilities. His major research interests include optical fiber communication system, coherent systems, digital communication, and communication systems. He has worked as Principal Investigator for four research projects funded by AICTE. He has published more than 100 research articles in leading international journals and conference proceedings. He has also edited five conference proceedings. Dr. Singh is a Fellow of IETE, and several international and national societies.