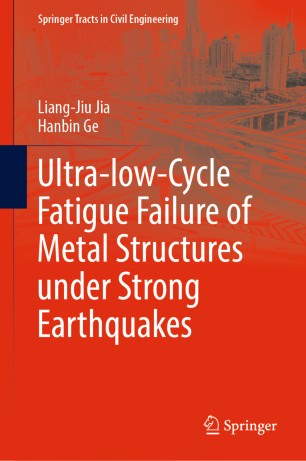 This book presents experimental results and theoretical advances in the field of ultra-low-cycle fatigue failure of metal structures under strong earthquakes, where the dominant failure mechanism is ductile fracture. Studies on ultra-low-cycle fatigue failure of metal materials and structures have caught the interest of engineers and researchers from various disciplines, such as material, civil and mechanical engineering. Pursuing a holistic approach, the book establishes a fundamental framework for this topic, while also highlighting the importance of theoretical analysis and experimental results in the fracture evaluation of metal structures under seismic loading. Accordingly, it offers a valuable resource for undergraduate and graduate students interested in ultra-low-cycle fatigue, researchers investigating steel and aluminum structures, and structural engineers working on applications related to cyclic large plastic loading conditions.

Dr. Liang-Jiu JIA received his B.E. and M.E. degrees in Civil Engineering from Tongji University, Shanghai, China, in 2007 and 2010, respectively, and his Ph.D. degree in Structural Engineering from the University of Tokyo, Japan, in 2013. From November 2013 to March 2015, Dr. JIA worked at Meijo University as a postdoctoral researcher, and from March 2015 to January 2018, he worked at the College of Civil Engineering, Tongji University as an Assistant Professor. Currently, he is an Associate Professor at Tongji University, where his work focuses on the seismic design of steel structures. His other research interests include structural control, metallic dampers, and ductile fracture in metal structures. Since 2010, Dr. JIA has published more than 50 peer-reviewed technical papers in international journals and conference proceedings. He has served as a reviewer for several international journals, and section chair of the 15th East Asia-Pacific Conference on Structural Engineering and Construction (EASEC-15) in 2017. He was a recipient of the CIDECT President’s Student Award at the 13th International Symposium on Tubular Structures in 2010.

Dr. Hanbin GE is a Professor of Structural Engineering at Meijo University, Japan. He graduated from Huazhong University of Science and Technology, China in 1986, and then studied and worked at Nagoya University, Japan for 20 years. Professor GE has co-authored 16 books, more than 300 journal papers, and numerous seismic design codes. His main research interest is in the behavior of structural members and systems, with particular emphasis on seismic and damage control design, seismic performance evaluation, fractural behavior, and retrofitting steel and steel-concrete composite structures.