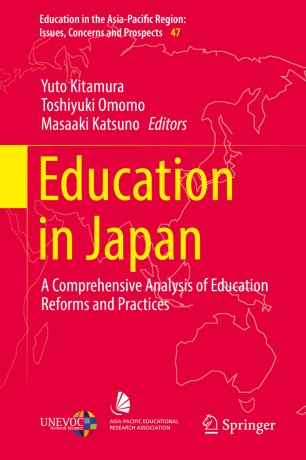 A Comprehensive Analysis of Education Reforms and Practices

Part of the Education in the Asia-Pacific Region: Issues, Concerns and Prospects book series (EDAP, volume 47)

This book illustrates the nature of Japan’s education system and identifies its strengths and weaknesses, as well as the socioeconomic environment surrounding education in contemporary Japanese society. It describes the basic institutional structure of each educational stage, in an overview of today’s school education in Japan, while also analyzing the current implementation status of important policies and the progress of reform at each stage. The book also examines the status of and problems with various issues that are considered essential to education in Japan today. These include teachers, lesson studies, school and community, educational disparities, education and jobs, multiculturalism, university reforms, internationalization of education and English-language education, education for sustainable development, and others, covering a diverse range of fields. The book is unique in its attempt to comprehensively understand and analyze the educational field in Japan by drawing on the expertise of various academic disciplines.