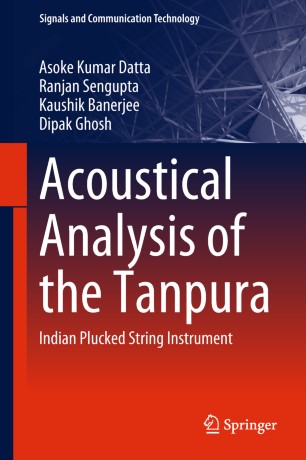 Acoustical Analysis of the Tanpura

This book addresses the acoustic signal analysis and spectral dynamics of the tanpura, an Indian plucked string instrument. In addition, it strives to provide a logical and objective explanation of Indian classical musicians’ cognitive experience. Issues of relevance in this regard include the rich, mellifluous sound; the undulation of the loudness; the somewhat cyclical variation of the timbre, which is strongly related to these undulations; and the occasional perception of virtual notes to which no strings are tuned.

The book analyses the materials used in the tanpura, the instrument’s simple structure, the intricacies of the lower bridge, and the theory of string vibration with variable string length. Cognitive experiments to provide the basis for perceptual quality assessment, as well as a methodology for ranking, are described. This is followed by acoustic analyses, both temporal and spectral, for sounds produced by male and female tanpuras, for each individual string and the combined one. An important aspect related to the naturalness of perceived sound, namely the intrinsically associated random perturbations, is also discussed. The apparent irregularities perceived in the acoustic signal produced by the tanpura reveal the importance of examining the signal from the perspective of non-linear analysis, an aspect that is also covered in the book.

Given its scope, the book will appeal to students and researchers in the fields of music acoustics, artificial intelligence, and cognitive science, as well as musicians and musicologists around the world.