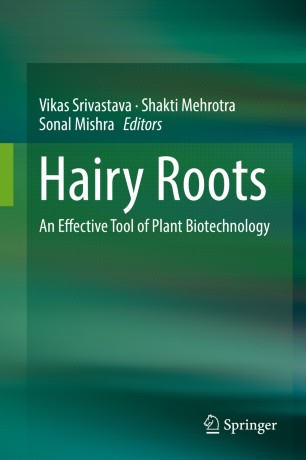 An Effective Tool of Plant Biotechnology

The growing scale of plant-based chemicals for industrial use has generated considerable interest in developing methods to meet their desired production levels. Among various available strategies for their production, the development of Agrobacterium rhizogenes mediated hairy root cultures (HRCs) is generally considered the most feasible approach. Additionally, several proof-of-principle experiments have demonstrated the practical feasibility of HRCs in the plant-based remediation of environment pollutants, biotransformation of important compounds, and production of therapeutic proteins.Given that hairy root biotechnology has now been recognized as a promising and highly dynamic research area, this book offers a timely update on recent advances, and approaches hairy roots as a multifaceted biological tool for various applications. Further, it seeks to investigate the loopholes in existing methodologies, identify remaining challenges and find potential solutions by presenting well thought-out scientific discussions from various eminent research groups working on hairy root biotechnology. This book provides detailed conceptual and practical information on HRC-based research, along with relevant case studies. The content is divided into three broad sections, namely (i) Hairy Roots and Secondary Metabolism, (ii) Progressive Applications, and (iii) Novel Approaches and Future Prospects. By informing the research and teaching community about the major strides made in HRC-based interventions in plant biology and their applications, the book is sure to spark further research in this fascinating field.

Dr Vikas Srivastava is an Assistant Professor at the Department of Botany, Central University of Jammu, India. He completed his joint PhD at the Central Institute of Medicinal and Aromatic Plants (CSIR-CIMAP, Lucknow) and Lucknow University, India. Further, he completed his postdoctorate from the National Institute of Plant Genome Research (NIPGR), New Delhi, India. He has published numerous articles for books and prominent international journals and has been a Principal Investigator for major projects sanctioned by the University Grant Commission (UGC), New Delhi. In addition, he is a recipient of various awards and prestigious fellowships.

Dr Shakti Mehrotra received her joint PhD from the Central Institute of Medicinal and Aromatic Plants (CSIR-CIMAP, Lucknow) and Lucknow University, India. Further, she completed her postdoctorate at the Institute of Engineering and Technology, Lucknow (DBT-PDF) and CSIR-CIMAP (DST-Young Scientist). She has published several articles and book chapters and worked as a Principal Investigator for major projects sanctioned by the Department of Science and Technology (DST) and Department of Biotechnology (DBT), India. Her contributions have been recognized with various awards and fellowships.

Dr Sonal Mishra is a SERB-National Post Doc Fellow (SERB-NPDF) at the School of Biotechnology, University of Jammu, India. She received her joint PhD from the Central Institute of Medicinal and Aromatic Plants (CSIR-CIMAP, Lucknow) and Jawaharlal Nehru University, New Delhi. Further, she completed her postdoctorate at Jawaharlal Nehru University and the National Institute of Plant Genome Research (NIPGR), India. She has published in many books and prominent international journals, and is currently a Principal investigator for a major project sanctioned by SERB (Science and Engineering Research Board), India. She has received various awards and fellowships in the course of her career.