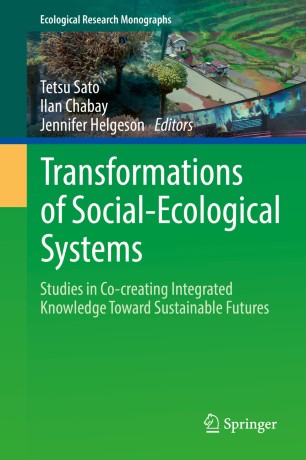 Through this book, readers will gain a comprehensive overview of transdisciplinary knowledge co-production in local contexts as an issue-driven and solution-oriented process, and will come to understand its relationship to societal transformation processes toward sustainability. In a single volume, the theory, approaches and academic implications of this novel type of knowledge production are addressed, together with its societal impacts.

In the midst of global anthropogenic impacts that affect various environments, over the past few decades we have observed autonomous initiatives in local communities around the world to tackle these environmental challenges. It is vital that such local actions be scaled up to achieve sustainable societies, which requires societal transformation on larger scales. Thanks to numerous collaborative actions in local communities, transdisciplinary knowledge co-production among diverse stakeholders has successfully been mobilized, resulting in the development of Integrated Local Environmental Knowledge (ILEK); knowledge that can inform and support decisions and actions promoting the sustainable transformation of society.

This book uses comparative case studies in communities around the world to illuminate and clarify processes and factors promoting the co-production and utilization of ILEK to facilitate decision-making. In addition, readers will gain deeper insights into the science-society interactions that can contribute to finding collaborative solutions to a wide range of critical environmental problems. Though the book is ideally suited for researchers and students, it also offers a valuable resource for practitioners, government agencies, and stakeholder agencies.

Prof. Sato studied the ecology of cichlid fishes of African lakes for 20 years, and expanded his research into adaptive governance of complex social-ecological systems. Throughout his career, including as conservation director of the WWF Japan and professor of Nagano University, he focused on creating knowledge bases for community-based management of natural resources. As the project leader of the ILEK project (from 2012 to 2017), he has explored a transdisciplinary approach to co-produce integrated local environmental knowledge (ILEK) as the knowledge basis for decision making and actions of diverse stakeholders for societal transformations toward sustainability. Since 2017, he has been leading a 3-year research project at Ehime University titled “Transdisciplinary Study of Natural Resource Management Under Poverty Conditions Collaborating with Vulnerable Sectors (TD-VULS project)”, funded by the Research Institute of Science and Technology for Society (RISTEX), Japan Science and Technology Agency.

At IASS, where he has been since 2012, Prof. Chabay was co-leader of interdisciplinary research on ecological, social, and economic transformations in the Eurasian Arctic (2013–2016). He has published more than 60 peer-reviewed articles in major journals in social and natural science and holds three patents. He serves on international advisory boards on affordable energy for humanity, environmental systems research, social dimensions of creativity and innovation, and integrated risk governance. He was Helmholtz Alliance ENERGY-TRANS professor at the University of Stuttgart Institute for Social Science (2012–2014), elected honorary member of the Swiss Academy of Humanities and Social Sciences, and appointed Hasselblad Professor in sociology and applied IT in Gothenburg and Chalmers Universities, Sweden (2006–2011). He founded the New Curiosity Shop, a workshop in Silicon Valley (1984–2001), where he led design and production of interactive science exhibitions for 230 museums, science centres, and corporations worldwide, including Disney and NASA. He was associate director of the Exploratorium Science Museum, San Francisco (1982–1983), consulting professor of chemistry at Stanford University (1984–1988), and led research on non-linear optical spectroscopy at US NIST (1974–1982) after receiving his Ph.D. in chemical physics from the University of Chicago.

Dr. Helgeson leads the Applied Economics Office at NIST’s work on the economics of community resilience planning. She is primarily interested in economic analyses that consider behavioural aspects and approaches to dealing with environmental issues. In the past, she was a researcher at the Centre for International Climate and Environmental Research, Norway, and a climate adaptation specialist at the Organisation for Economic Co-operation and Development (OECD), France. She holds an M.Sc. degree in environmental change and management from the University of Oxford. She received her Ph.D. from the London School of Economics. She was the recipient of a Fulbright grant to Norway, where she studied the socioeconomics of transboundary reindeer herding. Dr. Helgeson has authored articles, reports, and book chapters related to the importance of recognizing perceptions and heuristics in studying economic and social decisions. She has also designed experiments related to risk perception and resilience that have been applied from rural Uganda to the Northeast USA. Additionally, she has co-edited a previous book on land restoration practices.