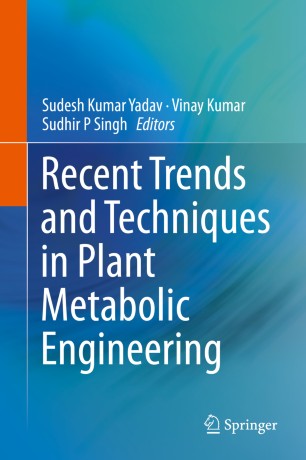 Remarkable research has yielded whole genome data in plants, resulting in the documentation of an ever-increasing number of genes, without establishing their functions. The huge data resources available at the genome, transcriptome, proteome and metabolome levels are of enormous value in the field of functional genomics.

This book provides insights into interpreting the sea of data in order to understand basic and practical aspects of plant metabolic engineering. It discusses in detail ways to tap into this enormous pool of data to increase productivity, and offers information that is both interesting and necessary for exploring the manipulation of metabolic pathways. The interdisciplinary approaches presented here also serve as a source of ideas for practical applications.

Dr. Sudesh Kumar Yadav obtained his PhD in 2002 from the Department of Biochemistry, CCS Haryana Agricultural University, Hisar. Subsequently, he worked as post-doctoral fellow at ICGEB, New Delhi (2002-2004). He worked as scientist at CSIR-Institute of Himalayan Bioresource Technology, Palampur (HP), India. He is currently a Scientist-F at Center of Innovative and Applied Bioprocessing (CIAB), Department of Biotechnology,Mohali, India. Under his guidance, six students have obtained their PhD degrees. He has been working in the area of plant metabolic engineering and nanobiology.
He has published more than 110 research articles in peer reviewed journals, 1 book and 10 book chapters so far. For his outstanding research contributions in the area of plant sciences, he has been honoured with many prestigious awards; Indian National Science Academy (INSA)-Young Scientist Award-2008, The National Academy of Science, India (NASI)-Platinum Jubilee Young Scientist Award-20
09, Council of Scientific and Industrial Research (CSIR)-Young Scientist Award-2010. He has been awarded BOYSCAST Fellowship during 2008 by DST, GOI for conducting advanced research at UCR, Riverside, USA for one year. He has been also selected “NAAS-Associate” by the National Academy of Agricultural Sciences from 2013 and conferred “Prof. Hira Lal Chakravarty Memorial Award” of Indian Science Congress Association (ISCA) for the year 2012-2013 during 100th Session of Indian Science Congress at Kolkata. Adding another feather to his achievements, he has now been selected by Haryana State Council for Science and Technology, Department of Science and Technology, Govt. of Haryana for the “Haryana Yuva Vigyan Ratna Award” 2011-12 for his excellent research contributions.
Dr Vinay Kumar is an early career university lecturer at Centre for Plant Sciences, Central University of Punjab, India. He is teaching “Plant Metabolic Engineering” and “Tissue
Culture and Genetic Engineering” courses at post gradation level and have strong thrust to establish scientific career in area of “Plant Genetic and Metabolic Engineering. His research interest include epigenetic regulation, metabolomics and, genetic and metabolic engineering. He earned his doctorate degree on area of “Metabolic Engineering of Plant Secondary Metabolism” in 2013 from CSIR-IHBT, Palampur, India. He has made significant contributions in the area of “Plant Metabolic Engineering” through biotechnological approaches for manipulating certain pathways in plants with more than 20 publications and awarded with “AU-CBT Excellence Award” of the Biotech Research Society of India for his outstanding contribution in plant biotechnology. He has also significantly contributed in area of “Transcriptome and epigenome diversity analysis during seed development in chickpea” during postdoctoral study at National Institute of Plant Genome Research, New Delhi (Mentor: Dr. Mukesh Jain) before joining Central University of Punjab.
He is also active review editor of Frontier in Plant Science in the sections of Plant Metabolism and Chemodiversity, and Plant Biotechnology.
Dr. Sudhir P. Singh obtained his Ph.D. in 2011 from University of Lucknow, India. Subsequently, he worked as research associate and then project scientist at National Agri-Food Biotechnology Institute, Mohali, India. He joined Center of Innovative and Applied Bioprocessing, Mohali, India in 2015, and presently working as Scientist. He has been working in the area of plant molecular biology, and synthetic biology. In plant molecular biology he has significantly contributed by developing a stringently regulated expression system for inducing male sterility in plants. He has investigated the spatial distribution pattern of different nutritionally important micro- and macro-nutrients and its probable impact on mineral bioavailability, and the genes responsibl
e for contrasting level of mineral accumulation in wheat grains. His group generated the first early-stage fruit specific transcriptome resource for Annona squamosa. He has been interest in employing the knowledge of molecular biology for translational research. His group has established a novel approach of biotransformation of fruit and vegetable residues for the production of nearly zero calorie functional monosaccharide. He has 30 research papers and 1 review article in peer reviewed journals, 2 book chapters, and three patents to his credit.