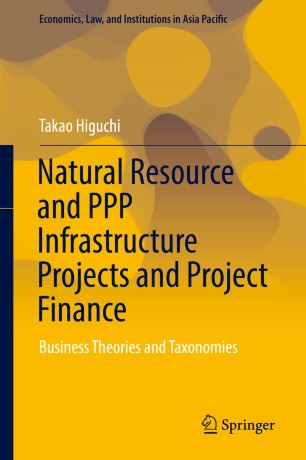 This is one of the first books that comprehensively explains fundamental theories of natural resource and infrastructure public private partnership (NRI–PPP) projects and project finance.

NRI–PPP projects and project finance have been adopted in natural resource development, including oilfield development, mine development, and liquefied natural gas production; manufacturing, such as petrochemistry, which uses crude oil; and infrastructure-related projects such as railways, roads, airports, ports, water supply, waste treatment, communications, and electricity.

Readers of this book will include not only professionals in various private sectors and banks but also those involved in PPP projects in the public sector.

Takao Higuchi is a partner at Nagashima Ohno & Tsunematsu, a Japanese law firm. He has more than 29 years of experience in project finance, corporate finance, and banking, with a particular focus on infrastructure and energy projects and Public–private partnership (PPP) and PFI transactions.

Mr. Higuchi graduated with an LL.B. from The University of Tokyo in 1987 and with an LL.M. from Columbia Law School in 1995. He was admitted to the bar in Japan in 1989. He worked at Milbank, Tweed, Hadley & McCloy LLP in New York (1995–1996) and Linklaters & Paines in London (1996–1997) as a visiting attorney. He also worked exclusively for the Project Finance Department of The Export–Import Bank of Japan in Tokyo (1997–1999). Further, since 2010 he has served as a part-time instructor (hijokin koshi) at the Graduate School of Management, Kyoto University.