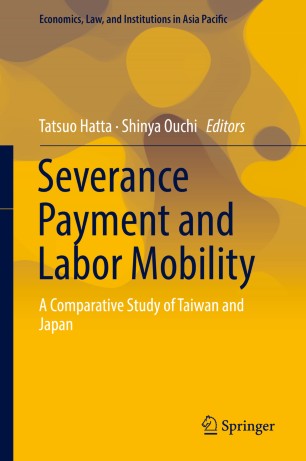 A Comparative Study of Taiwan and Japan

A significant difference exists between employment regulations of Japan and Taiwan. In Japan, dismissal of an employee on the grounds of ability is not easily upheld in a court of law, and a set rule for dismissals with severance payment does not exist. On the other hand, in Taiwan, where regulations do not allow dismissal at will, an employee can still be dismissed with severance payment, as long as due process is followed.

Written by labor lawyers and labor economists from both Taiwan and Japan, this book describes the procedures that must be followed in the dismissal process in the two countries. It also shows that this difference in dismissal conditions between the two countries explains the low labor mobility in Japan and high labor mobility in Taiwan, and that this difference in labor mobility, in turn, caused the shift of IT production from Japan to Taiwan in the 1990s. The final chapter of the book elucidates the need for introducing the Taiwan-style severance payment before carrying out further deregulation in Japan.

Tatsuo Hatta is president and economics professor of the Asian Growth Research Institute. He has also held the positions of assistant professor at the Ohio State University, and professor at Johns Hopkins University, Osaka University, and The University of Tokyo. Between 2007 and 2011 he was the president of the National Graduate Institute for Policy Studies. He was president of the Japanese Economic Association in 2003 and 2004, and he is currently a member of the Council of National Strategic Special Zones of the Cabinet Secretariat of the Japanese Government. He received a B.A. in economics from International Christian University, Tokyo in 1965 and a Ph.D. in economics from Johns Hopkins University in 1973. His academic contributions have appeared in such journals as the American Economic Review, the Review of Economic Studies, Econometrica, and the Quarterly Journal of Economics. His recent research fields include deregulation of electricity systems, dismissal regulations, and postwar Japanese economic history.

Shinya Ouchi is a professor of law in the Faculty of Law and Graduate School of Law, Kobe University, Japan. He served as associate professor between 1996 and 2001 and since 2001 has served as full professor. He obtained an LL.B from The University of Tokyo Faculty of Law and an LL.M and Ph.D. from The University of Tokyo Graduate Schools for Law and Politics. His field of research and specialization is labor law and employment policy. His recent research focuses include the impacts of digitalization, robotics, and artificial intelligence on the labor market. Professor Ouchi’s co-edited works include Labour Law in Motion: Diversification of the Labour Force and Terms and Conditions of Employment (Roger Blanpain and Takashi Araki, co-editors;  Kluwer 2004); Decentralizing Industrial Relations and the Role of Labor Unions and Employee Representatives (Roger Blanpain and Takashi Araki, co-editors; Kluwer 2007); and Reconsidering unfair dismissal in Japan: Design of the monetary compensation system (Daiji Kawaguchi, co-editor; Yuhikaku, Tokyo, 2018).