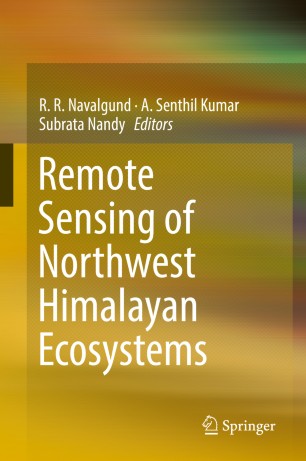 Himalaya, one of the global biodiversity hotspots, is the abode of a variety of flora and fauna. The Himalayan ecosystems have immense ecological, socioeconomic, and aesthetic significance as they provide a wide range of ecosystem services. The northwest Himalaya (NWH), covering three states of India viz., Uttarakhand, Himachal Pradesh, and Jammu and Kashmir, starts from the foothills of Shivaliks in the south and extends to the greater Himalaya in the north.  This region is also the source of some of the major rivers of India. With the increase in population, the NWH ecosystems have been under threat due to deforestation, loss of biodiversity, expansion of agriculture and settlement, overexploitation of natural resources, habitat loss and fragmentation, poaching, mining, construction of roads and large dams, and unplanned tourism. The Himalaya being young and geotectonically active, remains inherently unstable, fragile, and prone to natural disasters. Climate change is also likely to impact the Himalayan cryosphere drastically. Recognizing the importance of the Himalaya, a National Mission for Sustaining the Himalayan Ecosystem, one of the eight missions under the National Action Plan on Climate Change (NAPCC) of Govt. of India, to conserve biodiversity, forest cover and other ecological values in the Himalayan region has been taken up.

Spaceborne remote sensing with its ability to provide synoptic and repetitive coverage has emerged as a powerful tool for assessment and monitoring of the Himalayan resources and phenomena. Indian Institute of Remote Sensing, Dehradun has taken up a number of studies in the fields of geology, water resources, forestry, agriculture, urban settlement, etc., over the last decade. The book summarises the work carried out in different disciplines, illustrated with tables and figures and a host of relevant references. It is hoped that the book serves as an excellent reference of immense value to the students, researchers, professors, scientists, professionals, and decision makers working in the NWH region.

Dr. Ranganath Navalgund obtained his Ph D in Physics from the Tata Institute of Fundamental Research, Mumbai and joined the Space Applications Centre (ISRO) in 1977. Since then he has worked in ISRO till today in different capacities. His scientific contributions are in the broad area of earth observation systems, science and applications. As Director of National Remote Sensing Centre (2001-2005) and the Space Applications Centre (2005-2012), the two major centres of ISRO, he has over seen the formulation and execution of national level  RS application programmes, establishment of EO data reception systems, Decision Support Centre for disaster monitoring and mitigation, development of electro-optical and microwave sensors for Indian earth observation and planetary science missions, communication and navigation payloads onboard Indian satellites and has interfaced with several space agencies of different countries in a leadership role. He was the President of the International Society for Photogrammetry and Remote Sensing Technical Commission VII (2000-2004). He is a Fellow of the Indian Academy of Sciences, an Academician of the International Academy of Astronautics and a fellow of many other professional societies. He has been a recipient of many awards including the Bhaskara award of the Indian Society of Remote Sensing and the Outstanding Achievement award of ISRO besides many others. He is also in the Editorial Board of Current Science, a professional Indian journal. He is currently Honorary Distinguished Professor at ISRO Headquarters, Bengaluru.

Dr. A. Senthil Kumar received Ph.D. from the Indian Institute of Science, Bangalore in the field of image processing in 1990. He joined ISRO in 1991 and has been serving in Indian satellite programs in various capacities. His research includes sensor characterization, radiometric data processing, image restoration, data fusion, and soft computing. He is currently the Director of Indian Institute of Remote Sensing, Dehradun and also the Director of UN affiliated Center for Space Science and Technology Education in Asia and the Pacific. He is the President of ISPRS Technical Commission V on Education and Outreach, and also as Chair of CEOS Working Group on Capacity Building and Data Democracy. He has published about 80 technical papers in international journals and conferences, besides technical reports. He is a recipient of ISRO Team awards for Chandrayaan-1 mission and Prof. Satish Dhawan Award conferred by the Indian Society of Remote Sensing

Dr. Subrata Nandy received M. Sc. and M.Phil. in Ecology from Assam University, Silchar, Assam. He obtained his Ph.D. in Forest Geoinformatics from the Forest Research Institute University, Dehradun. He joined Indian Institute of Remote Sensing, ISRO, Dehradun as Scientist/Engineer-SC in 2008. His research expertise includes forest biomass/carbon and productivity assessment, and LiDAR remote sensing in forestry. He has more than 15 years of research experience in the applications of remote sensing and GIS in forestry and ecology. He worked significantly in the synergistic use of passive optical and LiDAR data for forest biomass/carbon assessment using various techniques. He also contributed immensely in National level projects, ISRO’s earth observation application mission and technology development projects. He has published 33 research papers in peer reviewed journals. He is a life member of the Indian Society of Remote Sensing, Indian Society of Geomatics and Indian Meteorological Society. He is currently working asScientist/Engineer-SE in Forestry and Ecology Department of Indian Institute of Remote Sensing, ISRO, Dehradun.