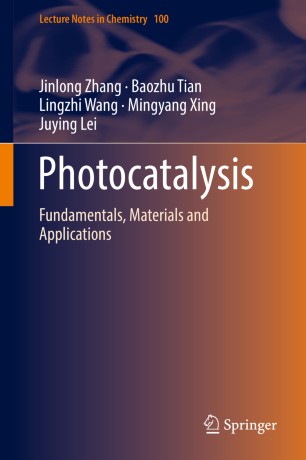 This book describes the photocatalytic mechanism, factors affecting photocatalytic activity, design and preparation of different kinds of nanostructured photocatalysts, and their applications in the environmental and energy fields. Further, it illustrates a broad range of modification methods including ion-doping, heterojunction, noble metal deposition, morphological control and sensitizations, which are used to extend the light absorption range of photocatalysts and reduce recombination between electrons and holes. Promising applications include water splitting, contaminant decomposition and photocatalytic reduction of CO2, which are closely related to environmental redemption and new energy development. The book offers an intriguing and useful guide for a broad readership in various fields of catalysis, material sciences, environment and energy.

Prof. Dr. Jinlong Zhang received his PhD in Applied Chemistry from East China University of Science and Technology in 1993. In 1996 he received a JSPS fellowship and worked at Osaka Prefecture University, Japan as a postdoctoral researcher. He became a full professor at East China University of Science and Technology in 2000. He has published over 300 research papers with more than 11,000 citations, and his H-index is 54. He serves as the Editor of “Res. Chem. Intermed.” and on the editorial boards of several international journals, including “Scientific Reports”, “Applied Catalysis B: Environmental”, “Dyes and Pigments” and “Photographic Science and Photochemistry”. His research interests primarily include photocatalysis and its application in environmental pollution control, as well as mesoporous materials.