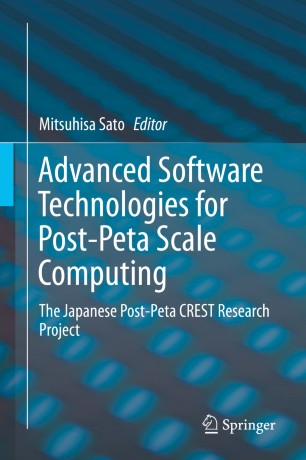 This book grew out of the post-peta CREST research project funded by the Japan Science and Technology Agency, the goal of which was to establish software technologies for exploring extreme performance computing beyond petascale computing. The respective were contributed by 14 research teams involved in the project.

In addition to advanced technologies for large-scale numerical computation, the project addressed the technologies required for big data and graph processing, the complexity of memory hierarchy, and the power problem. Mapping the direction of future high-performance computing was also a central priority.

Mitsuhisa Sato is a deputy director of the RIKEN Center for Computational Science (R-CCS). He was a professor at the Graduate School of Systems and Information Engineering, University of Tsukuba from 2001. He has been working as a director of the Center for Computational Sciences, University of Tsukuba from 2007 to 2013. Since October 2010, he is appointed to the research team leader of programming environment research team in the Advanced Institute of Computational Science (AICS), former R-CCS, which was the organization to run Japanese petaflops facility "K computer". Since 2014, he is working as a team leader of architecture development team in the Japanese FLAGSHIP2020 project to develop the next system of the K computer in R-CCS. He is a professor (Cooperative Graduate School Program) and professor emeritus of University of Tsukuba.