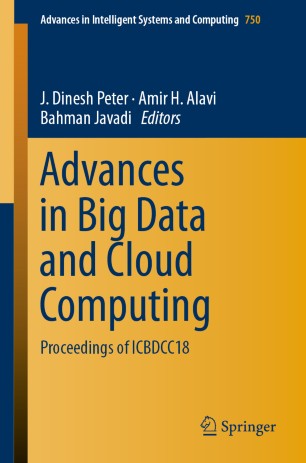 Part of the Advances in Intelligent Systems and Computing book series (AISC, volume 750)

This book is a compendium of the proceedings of the International Conference on Big Data and Cloud Computing. It includes recent advances in the areas of big data analytics, cloud computing, internet of nano things, cloud security, data analytics in the cloud, smart cities and grids, etc. This volume primarily focuses on the application of the knowledge that promotes ideas for solving the problems of the society through cutting-edge technologies. The articles featured in this proceeding provide novel ideas that contribute to the growth of world class research and development. As this book is a concise compilation of articles approved by the panel of expert reviewers, the contents of this proceeding will prove to be an invaluable asset to the researchers in the area of advanced engineering sciences.

J. Dinesh Peter is currently working as Associate Professor, Department of Computer Sciences Technology at Karunya University, Coimbatore. Prior to this, he was a full time research scholar at National Institute of Technology, Calicut, India, from where he received his PhD in computer science and engineering. His research focus includes Big-data, image processing and computer vision. He has several publications in various reputed international journals and conference papers which are widely referred to. He is a member of IEEE, CSI & IEI and has served as session chairs and delivered plenary speeches for various international conferences and workshops. He has conducted many international conferences and been as editor for Springer proceedings and many special issues in journals.

Amir H. Alavi received his PhD degree in Civil Infrastructure Systems from Michigan State University (MSU). He also holds a M.S. and B.S. in Civil and Geotech^ 4100 times; h-index = 34). More, he is selected as the advisory board of Universal Scientific Education and Research Network (USERN), which belongs to all top 1% scientists and the Nobel laureates in the world.

Dr. Bahman Javadi is a Senior Lecturer in Networking and Cloud Computing at the Western Sydney University, Australia. Prior to this appointment, he was a Research Fellow at the University of Melbourne, Australia. From 2008 to 2010, he was a Postdoctoral Fellow at the INRIA Rhone-­-Alpes, France. He received his MS and PhD degrees in Computer Engineering from the Amirkabir University of Technology in 2001 and 2007, respectively. He has been a Research Scholar at the School of Engineering and Information Technology, Deakin University, Australia during his PhD course. He is cofounder of the Failure Trace Archive, which serves as a public repository of failure traces and algorithms for distributed systems. He has received numerous Best Paper Awards at IEEE/ACM conferences for his research papers. He served as a program committee of many international conferences and workshops. His research interests include Cloud computing, performance evaluation of large scale distributed computing systems, and reliability and fault tolerance. He is a member of ACM and senior member of IEEE.