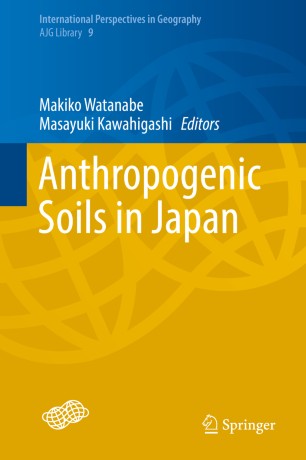 Part of the International Perspectives in Geography book series (IPG)

This book enhances the discussion of anthropized soils with photographs of soil profiles and provides general information about soils in Japan, using data on their physical and chemical properties. Soils targeted in this book have wide spectra in anthropized influences from lesser effects such as agricultural improvements to drastic changes caused by infrastructure construction. These include soils sealed by technic hard materials, on ski slopes, on river embankments and coastal berms, in historical urban parks, on man-made islands in Tokyo Bay, in reclaimed lands, in greenhouse fields, and those filling in swamplands. These examples supported with data can be a bridge between agriculture and civil engineering to understand how anthropogenic activities influence soils. Because anthropogenic impacts have increased during the past decades along with concentrations of populations into cities, processes in soils must be addressed from the point of view of diverse land-use purposes.
The book includes information with new data produced by active researchers from many institutes and universities as it refers to soils altered by human activities and thus is informative to specialists in various disciplines related to soils. It is also valuable to students for viewing soils in cities, infrastructure construction areas, and other affected locations. Evaluation and understanding of soils now has become essential for researchers in a range of fields and for policy makers in agriculture as well as urban planning, civil engineering, and disaster sciences. This work serves as an impetus for launching further study of soils and environments.

Makiko Watanabe is professor of soil geography in the Graduate School of Urban Environmental Sciences, Tokyo Metropolitan University, Japan. She is a leader of the Kenkyu-kan Project “Role of Soils in Mega Asian Cities”, supported by the President’s Expenditure of Tokyo Metropolitan University (2015–2018). She was a program officer of the Japan Society for the Promotion of Science (2009–2011), a member of the Science Council of Japan (2006–2014), and currently is a member of the National Research and Development Agency Council of the Ministry of Agriculture, Forestry and Fisheries (2015–present). She was a visiting scholar at St. Catherine’s College, University of Cambridge (1998), a visiting professor at the Department of Historical Ecology, Krasnoyarsk State University (2000), and a visiting professor at the Department of Geography and Environmental Studies, University of Regina, Canada (2016). Based on her abundant field experience in the Philippines, Germany, Egypt, Canada, and Mongolia, she has a broad view of the time and space of soil and individual land history. Her research achievements are specialized in long-term circulation of soil substances, and nature–human systems in regional environments, which provide basic knowledge of the potentiality and limitation of homeostasis in terrestrial earth and feasible strategies for sustainable development.

Masayuki Kawahigashi is associate professor of environmental geography in the Graduate School of Urban Environmental Sciences, Tokyo Metropolitan University, Japan. He is a delegate of the Japanese Society of Soil Sciences and Plant Nutrition, a consilor of Japanese Society of Pedology, a subject editor of Soil Science and Plant Nutrition (2013–2015, 2017–2018), and a visiting associate professor at the Faculty of Earth Sciences of Nicolaus Copernicus University in Toruń, Poland (2018). He was a visiting scientist at the University of Bayreuth (2002) and at the Martin Luther University of Halle-Wittenberg, supported by the Alexander von Humboldt Foundation (2003–2004). He focuses on dynamics of elements in ecosystems of various climatic zones from boreal to tropical regions, also addressing soil and water in agricultural and urban systems to understand anthropogenic impacts on ecosystems. Soils in anthropized environments are his latest challenges in researching soils from several different scientific points of view.