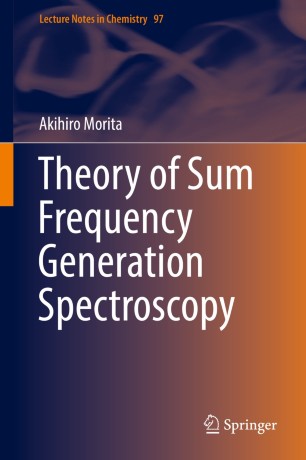 This book describes fundamental theory and recent advances of sum frequency generation (SFG) spectroscopy. SFG spectroscopy is widely used as a powerful tool of surface characterization, although theoretical interpretation of the obtained spectra has been a major bottleneck for most users. Recent advances in SFG theory have brought about a breakthrough in the analysis methods beyond conventional empirical ones, and molecular dynamics (MD) simulation of SFG spectroscopy allows for simultaneous understanding of observed spectra and interface structure in unprecedented detail. This book explains these recently understood theoretical aspects of SFG spectroscopy by the major developer of the theory. The theoretical topics are treated at basic levels for undergraduate students and are described in relation to computational chemistry, such as molecular modeling and MD simulation, toward close collaboration of SFG spectroscopy and computational chemistry in the near future.

Akihiro Morita received his Ph. D. degree from Kyoto University in 1995. He worked at Kyoto University, University of Colorado, and Institute for Molecular Science before moving to Tohoku University. Currently he is a professor at the Department of Chemistry, Tohoku University, majoring computational molecular science. His research interests include electronic structure and molecular dynamics of liquids and interfaces. His recent works focus on theoretical aspects of liquid interfaces, often in collaboration with experiments, including the interfacial sum frequency generation spectroscopy and mass transfer kinetics at liquid interfaces. He was awarded the Chemical Society of Japan Award for Creative Work (2012) and 1st International Investigator Award of the Japan Society for Molecular Science (2016) for the development of the theories for exploring liquid interfaces.