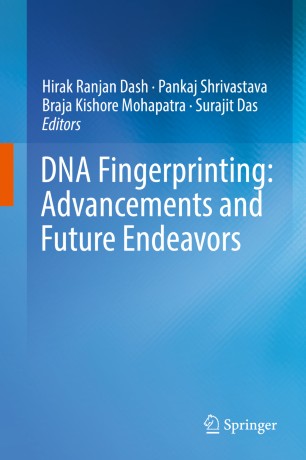 The book offers a practical guide for professionals, graduate and post-graduate students in the fields of Forensic Science, Medicine, Genetics, Anthropology, Microbiology, and Zoology. It also serves as a useful reference resource, summarizing major technological advances in the field of DNA fingerprinting, the problems faced in this field of science and possible new solutions to these problems. Presently, DNA fingerprinting is utilized in solving the majority of criminal cases; as such, the book is also helpful for investigating agencies, as it includes representative case studies.

Dr. Hirak Ranjan Dash completed his Ph.D. at the Department of Life Science, National Institute of Technology, Rourkela, India and is currently working as a Scientific Officer (DNA) at the Forensic Science Laboratory, Madhya Pradesh, India. He received his M.Sc. in Microbiology from Orissa University of Agriculture and Technology, Odisha, India. His research interests include forensic microbiology, thanatomicrobiome analysis, molecular microbiology, environmental microbiology, DNA fingerprinting, microbial phylogeny, genetic manipulation of bacterial systems and microbial diversity. He has developed a number of microbial techniques for the assessment of mercury pollution in marine environments, and has successfully constructed a transgenic marine bacterium for enhanced utilization in mercury removal by simultaneous mercury volatilization and sequestration. He has written 3 books and published 28 research papers, 11 book chapters and 12 conference proceedings.

Dr. Pankaj Shrivastava received his Ph.D. in Microbiology from Rani Durgawati University, Jabalpur. He is presently serving as a Scientific Officer at the DNA Fingerprinting Unit, Forensic Science Laboratory, Madhya Pradesh, India. He has more than 10 years of experience in examining a variety of criminal cases using DNA fingerprinting. The central theme of his research is the DNA analysis of caste and tribal populations of different parts of India, along with the development of new methodologies for improved forensic DNA typing. To date he has published 11 books and 61 scientific articles in reputed international journals. He is visiting faculty of the National Police Academy, Hyderabad, National Institute of Criminology and Forensic Science, Govt. of India, Delhi and the Central Police Academy, Bhopal, along with many Central and State Universities of India. He is a recipient of the Pt. Govind Vallabh Pant Samman Award from the Ministry of Home, Govt. of India, the Anusrijan Samman Award from AISECT University, Bhopal, the Dr. Lalji Singh Memorial Award and the FICCI Smart Policing Award for the development of a direct protocol in forensic DNA typing.

Dr. Braja Mohapatra completed his Ph.D. at Utkal University, Bhubaneswar. He is presently serving as a Senior Scientific Officer and Head of the Department, Biology and DNA Profiling Unit, Central Forensic Science Laboratory (CBI), New Delhi, India. He has more than 10 years of experience in examining various criminal cases using DNA fingerprinting. His research interests include the interpretation of DNA profiles in mixed samples, touch DNA, and population genetics. He has 13 peer-reviewed publications in reputed national and international journals to his credit. He is a recipient of the meritorious service award in Forensic Science. He has solved various high-profile cases through DNA fingerprinting, both in India and the Republic of Seychelles.

Dr. Surajit Das is an Associate Professor at the Department of Life Science, National Institute of Technology, Rourkela, India. He received his Ph.D. in Marine Biology from the Centre of Advanced Study in Marine Biology, Annamalai University, Tamil Nadu, India for his research work on marine microbiology. He has been awarded an Endeavour Research Fellowship by the Australian Government to carry out postdoctoral research at the University of Tasmania. As group leader of the Laboratory of Environmental Microbiology and Ecology (LEnME), he is currently conducting research on the biofilm-based bioremediation of PAHs and heavy metals using marine bacteria; nanoparticle-based drug delivery and nano-bioremediation; and metagenomic approaches for exploring the diversity of immunoglobulins in the Indian Major Carps, supported by research grants from the Ministry of Science and Technology, Indian Council of Agricultural Research, Ministry of Environment, Forest and Climate Change, and the Government of India. He is an Academic Editor for PLOS One and an Associate Editor (Ecological and Evolutionary Microbiology) for BMC Microbiology.