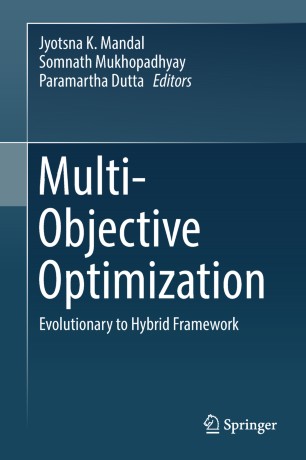 This book brings together the latest findings on efficient solutions of multi/many-objective optimization problems from the leading researchers in the field. The focus is on solving real-world optimization problems using strategies ranging from evolutionary to hybrid frameworks, and involving various computation platforms.
The topics covered include solution frameworks using evolutionary to hybrid models in application areas like Analytics, Cancer Research, Traffic Management, Networks and Communications, E-Governance, Quantum Technology, Image Processing, etc. As such, the book offers a valuable resource for all postgraduate students and researchers interested in exploring solution frameworks for multi/many-objective optimization problems.

Dr. Mandal received his M.Tech. in Computer Science from the University of Calcutta and his Ph.D. from Jadavpur University in the field of Data Compression and Error Correction Techniques. Currently he is a Professor of Computer Science and Engineering and Director of the IQAC at the University of Kalyani, West Bengal, India. He is a former Dean of Engineering, Technology & Management (2008–2012). He has 29 years of teaching and research experience. He has served as a Professor of Computer Applications, Kalyani Govt. Engineering College for two years and as an Associate and Assistant Professor at the University of North Bengal for sixteen years. He has been a Life Member of the Computer Society of India since 1992. Further, he is a fellow of the IETE and a member of the AIRCC.

He has produced 146 publications in various international journals, has edited twenty volumes as a volume editor for Science Direct, Springer, CSI etc., and has successfully executed five Research Projects funded by the AICTE, Ministry of IT Government of West Bengal. In addition, he is a guest editor of Microsystem Technology Journal and Chief Editor of the CSI Journal of Computing.

Somnath Mukhopadhyay is currently an Assistant Professor at Department of Computer Science and Engineering, Assam University, Silchar, India. He completed his M.Tech. and Ph.D. degrees in Computer Science and Engineering at the University of Kalyani, India, in 2011 and 2015, respectively. He has co-authored one book and has five edited books to his credit. He has published over 20 papers in various international journals and conference proceedings, as well as three chapters in edited volumes. His research interests include digital image processing, computational intelligence and pattern recognition. He is a member of IEEE and IEEE Computational Intelligence Society, Kolkata Section; life member of the Computer Society of India; and currently the regional student coordinator (RSC) of Region II, Computer Society of India.

Dr. Paramartha Dutta completed his Bachelor’s and Master’s degrees in Statistics at the Indian Statistical Institute, Calcutta in 1988 and 1990, respectively. He received a Master’s of Technology in Computer Science from the latter institute in 1993 and a Doctor of Philosophy in Engineering from Bengal Engineering and Science University, Shibpur in 2005. Dr. Dutta is currently a Professor at the Department of Computer and System Sciences, Visva Bharati University, West Bengal, India. Prior to this, he served Kalyani Government Engineering College and College of Engineering in West Bengal as a full-time faculty member.

He has coauthored eight books, and has five edited books to his credit. He has published over 180 papers in various journals and conference proceedings, both international and national, as well as several book chapters in books from respected international publishing house like Elsevier, Springer-Verlag, CRC Press, and John Wiley. He has also served as an editor of special volumes of several prominent international journals.