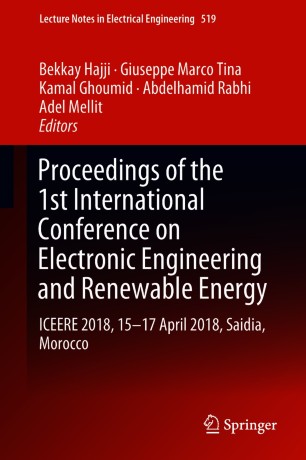 The proceedings present a selection of refereed papers presented at the 1st International Conference on Electronic Engineering and Renewable Energy (ICEERE 2018) held during 15-17 April 2018, Saidi, Morocco.
The contributions from electrical engineers and experts highlight key issues and developments essential to the multifaceted field of electrical engineering systems and seek to address multidisciplinary challenges in Information and Communication Technologies. The book has a special focus on energy challenges for developing the Euro-Mediterranean regions through new renewable energy technologies in the agricultural and rural areas.
The book is intended for academia, including graduate students, experienced researchers and industrial practitioners working in the fields of Electronic Engineering and Renewable Energy.

Bekkay Hajji received his DEA in microelectronics from the French "Institut National des Sciences Appliquées de Toulouse" (INSAT, France) in 1996. He joined the French “Laboratoire d’Architecture et d’Analyse des Systémes (LAAS) ” from the French “Centre National de la Recherche Scientifique (CNRS) ” in 1996 and received the PhD degree from the “Université Paul Sabatier” in 1999. He joined ST-Microelectronics-Casablanca (Morocco) as product Engineer in 2000 and the National School of Applied Sciences (Mohammed 1st University) in 2003 as a professor. His research activities are dedicated to the development of Bio-chemical micro-sensors, embedded system and renewable energy. He is also the director of “Renewable Energy, Embedded Systems and Information Processing laboratory”  at  National School of Applied Sciences, Mohamed First University.
Giuseppe Macro Tina received his MS and PhD degrees in Electrotechnics Engineering from the Catania University (Italy) in 1988 and 1992. Currently, he is Associate Professor of Electric Energy Systems at UdC and he received the National Academic Qualification as Full Professor in 2013. From 1993 to 1996, he worked in the industry with Agip Refineries and ST-Microelectronics in Italy and he was associate researcher for INFN, Catania (2002). He is responsible for Erasmus agreements for these Universities - Université de Corse (France), University of Jules Verne (France), TEI of Western Greece and University of Jaén, Spain. He was a Keynote Speaker at the 2012 IEEE EPE conference in Iasi Romania, an invited speaker at ICEEAC (Algeria, 2013) and WREC (UK, 2014).
Since 2015, he has been a member of the Editorial Board of the International Journal of Sustainable Energy. He is a co-author in more than 203 scientific papers, published in international journals and conference proceedings on the subject of electrical power systems. He is also responsible for the power system research group and lab at Udc. He is a member of the IEEE Power and Energy Society. From 2010 to 2015, he was the Vice President of the section of Catania of (AEIT) and coordinator of regional and national research grants and contracts.
Kamal Ghoumid received his PhD degree from the Institut TELECOM, TELECOM Sud-Paris, Evry, France, and Institute FEMTO-ST of the Franche-Comté University (Besaçon, France), in 2008. He previously graduated as an engineer in Electronics and telecommunications at CNAM-Paris (France), received his Masters in Communication Systems from Paris-Est University (France) and specialized Masters in Technics of Radio communications. He has worked as a post-doctoral researcher at Jean Lamour Institute of Henri Poincaré University (Nancy, France) from 2008 to 2009, and the Institut FEMTO-ST of the Franche-Comté University, Besaçon as well.
He is also an Assistant Professor in the National School of Applied Sciences (ENSAO), Mohammed Premier University of Oujda (Morocco), where he is the head of the research team on Signals, Systems and Information Processing. His research interests are mainly in signal processing and integrated optic components in the field of telecommunications, wireless and networks Communications, radio over fiber and communications systems.
Abdelhamid Rabhi received the Masters Degree from the University of Versailles, in robotics and control systems. He got his PhD in observation and control for non-linear and complex systems in December 2005. Since 2006, he has been an Associate Professor at the University of Picardie Jules Verne, Faculty of Sciences, and a researcher in the Modeling, Information and Systems (MIS) laboratory, Amiens, France.
His research activities deal with adaptive and robust control, diagnosis and observation for complex systems such as vehicles and robots. Applications of his research activities focus on areas such as vehicles and autonomous robots applications, as well as the MACSyME project (Modeling Analysis and Control of Systems with Multiple Energy sources).
Dr. Adel Mellit is a  Professor of Electronics at the faculty of sciences and technology, Jijel University, Algeria. He received the M.Sc.Eng.,and Doctorate degrees , both Electronics from the University of Sciences Technologies (USTHB) Algiers in 2002 and 2006 respectively. His research interests focus on the application of the artificial  intelligence techniques in photovoltaic systems and micro-grids, control, fault diagnosis, optimisation and  real time applications. He has authored and co-authored more than 90 papers in international peer reviewed journals (mostly in Elsevier), and papers in conference proceedings (Mostly in IEEE) mainly on photovoltaic systems and six book chapters. He is also the director of renewable energy laboratory at Jijel University and an associate member at the ICTP Trieste (Italy). He serves on the editorial board of Renewable energy and Energy journals (Elsevier Ltd).