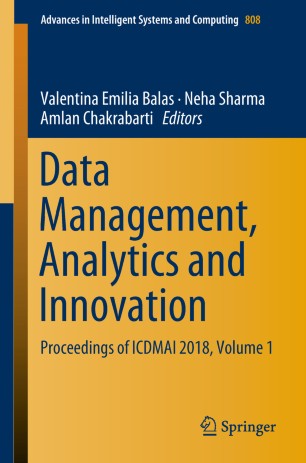 Part of the Advances in Intelligent Systems and Computing book series (AISC, volume 808)

The book presents the latest, high-quality, technical contributions and research findings in the areas of data management and smart computing, big data management, artificial intelligence and data analytics, along with advances in network technologies. It discusses state-of-the-art topics as well as the challenges and solutions for future development. It includes original and previously unpublished international research work highlighting research domains from different perspectives. This book is mainly intended for researchers and practitioners in academia and industry.

Dr. Balas was editor for more than 25 books in Springer and Elsevier. She is series editor for the work entitled Elsevier Biomedical Engineering from October 2017. Dr. Balas was participating in many international conferences as General Chair, Organizer, Session Chair and member in International Program Committee. She was Vice-president (Awards) of IFSA International Fuzzy Systems Association Council (2013-2015), responsible with recruiting to European Society for Fuzzy logic and Technology – EUSFLAT (2011-2013), Senior member IEEE, member in Technical Committees to Fuzzy Sets and Systems and Emergent Technologies to IEEE CIS and member in Technical Committee to Soft Computing to IEEE SMC.

Dr. Neha Sharma is serving as Professor at Vidya Pratishthan’s Institute of Information Technology (VIIT, Baramati), Pune and Secretary of Society for Data Science, India. Prior to this she has worked as Director, Zeal Institute of Business Administration, Computer Application & Research, Pune, Maharashtra, India, as Dy. Director, Padmashree Dr. D.Y.Patil Institute of Master of Computer Applications, Akurdi, Pune and as Professor at IICMR, Pune. She is an alumnus of a premier College of Engineering affiliated to Orissa University of Agriculture and Technology, Bhubaneshwar.  Neha Sharma has completed her PhD from prestigious Indian Institute of Technology (ISM), Dhanbad. She is a Website and Newsletter Chair of IEEE Pune Section and served as Student Activity Committee Chair for IEEE Pune Section as well. She is an astute academician and has organized several national and international conferences and seminars. She has published several papers in reputed indexed journals, both national as well as international. She is a well known figure among the IT circle of Pune, and well sought over for her sound knowledge and professional skills. Neha Sharma has been instrumental in integrating teaching with the current needs of the Industry and steering the college to the present stature. Not only loved by her students, who currently are employed in reputed firms; for her passion to mingle freely with every one, Neha Sharma enjoys the support of her colleagues as well. She is the recipient of “Best PhD Thesis Award” and “Best Paper Presenter at International Conference Award” at National Level by Computer Society of India. Her area of interest includes Data Mining, Database Design, Analysis and Design, Artificial intelligence, Big data and Cloud Computing.

Dr Amlan Chakrabarti is an ACM Distinguished Speaker, who is presently the Dean Faculty of Engineering and Technology and Director of the A.K.Choudhury School of Information Technology, University of Calcutta. He is an M.Tech. from University of Calcutta and did his Doctoral research at the Indian Statistical Institute, Kolkata. He was a Post-Doctoral fellow at the School of Engineering, Princeton University, USA during 2011-2012. He is the recipient of DST BOYSCAST fellowship award in the area of Engineering Science in 2011, Indian National Science Academy Visiting Scientist Fellowship in 2014, JSPS Invitation Research Award from Japan in 2016, Erasmus Mundus Leaders Award from European Union in 2017 and Hamied Visiting Fellowship of University of Cambridge in 2018. He is the Team Leader of European Center for Research in Nuclear Science (CERN, Geneva) ALICE-India project for University of Calcutta and also a key member of the CBM-FAIR project at Darmstadt Germany.  He is also the Principal Investigator of the Center of Excellence in Systems Biology and Biomedical Engineering, University of Calcutta funded by MHRD (TEQIP-II).

He has published around 120 research papers in referred journals and conferences. He has been involved in research projects funded by DRDO, DST, DAE, DeITy, UGC, Ministry of Social Empowerment, TCS and TEQIP-II. He is a Sr. Member of IEEE, Secretary of IEEE CEDA India Chapter and Sr. Member of ACM. His research interests are: Quantum Computing, VLSI design, Embedded System Design, Computer Vision and Analytics.