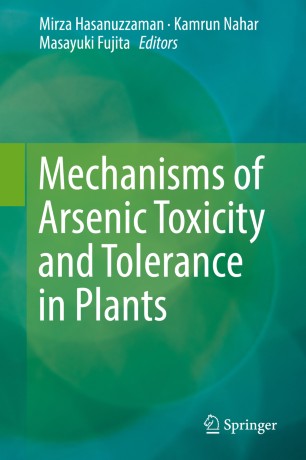 Mechanisms of Arsenic Toxicity and Tolerance in Plants

Arsenic is likely the most talked-about metalloid in the modern world because of its toxic effects on both animal and plants. Further, arsenic pollution is now producing negative impacts on food security, especially in many south Asian countries. Since plants are a major food source, their adaptation to As-rich environments is essential, as is being informed about recent findings on multifarious aspects of the mechanisms of arsenic toxicity and tolerance in plants. Although numerous research works and review articles have been published in journals, annual reviews and as book chapters, to date there has been no comprehensive book on this topic.
This book contains 19 informative chapters on arsenic chemistry, plant uptake, toxicity and tolerance mechanisms, as well as approaches to mitigation. Readers will be introduced to the latest findings on plant responses to arsenic toxicity, various tolerance mechanisms, and remediation techniques. As such, the book offers a timely and valuable resource for a broad audience, including plant scientists, soil scientists, environmental scientists, agronomists, botanists and molecular biologists.