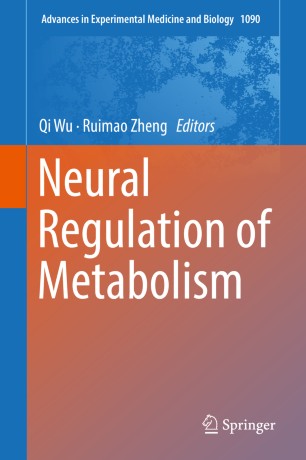 Part of the Advances in Experimental Medicine and Biology book series (AEMB, volume 1090)

This book systemically describes the mechanisms underlying the neural regulation of metabolism. Metabolic diseases, including obesity and its associated conditions, currently affect more than 500 million people worldwide. Recent research has shown that the neural regulation of metabolism is a central mechanism that controls metabolic status physiologically and pathophysiologically.

The book first introduces the latest studies on the neural and cellular mechanisms of hypothalamic neurons, hypothalamic glial cells, neural circuitries, cellular signaling pathways, and synaptic plasticity in the control of appetite, body weight, feeding-related behaviors and metabolic disorders. It then summarizes the humoral mechanisms by which critical adipocyte-derived hormones and lipoprotein lipase regulate lipid and glucose metabolism, and examines the role of the hypothalamus-sympathetic nerve, a critical nerve pathway from CNS to peripheral nervous system (PNS), in the regulation of metabolism in multiple tissues/organs. Furthermore, the book discusses the functions of adipose tissue in energy metabolism. Lastly, it explores dietary interventions to treat neural diseases and some of the emerging technologies used to study the neural regulation of metabolism. Presenting cutting-edge developments in the neural regulation of metabolism, the book is a valuable reference resource for graduate students and researchers in the field of neuroscience and metabolism.

Dr. Qi Wu is an Assistant Professor at the Department of Pediatrics, USDA Children’s Nutrition Research Center, Baylor College of Medicine in Houston, US. His research focuses on neural circuit control of feeding behavior and complications of metabolic diseases such as obesity, diabetes, mental disorders, and anorexia nervosa, and he has published nearly 30 research articles in this field. Dr. Wu is the Pew Scholar of Biomedical Sciences and the Kavli Scholar.

Dr. Ruimao Zheng joined Peking University Health Science Center as a Principal Investigator in 2013. He obtained a Ph.D. in Physiology from Peking University, China and received his postdoctoral training first at the Department of Pharmacology, University of Washington School of Medicine and then at Harvard Medical School and the Stem Cell Institute of Harvard University. His lab now utilizes genetically engineered mouse models in conjunction with optogenetic and chemogenetic approaches, recombinant viral vectors, viral tracing techniques, single-cell transcriptomics, and electrophysiology to decipher the neural nuclei and circuits controlling metabolic homeostasis. Dr. Zheng is an investigator in Peking University’s 100 Talent Program. His research focuses on neuroscience and neural regulation of metabolic and cardiovascular function, and he has published several research articles in these fields. He is a member of several national and international academic neuroscience and metabolism societies. Dr. Zheng is also engaged in teaching and training graduate and postgraduate students at Peking University.