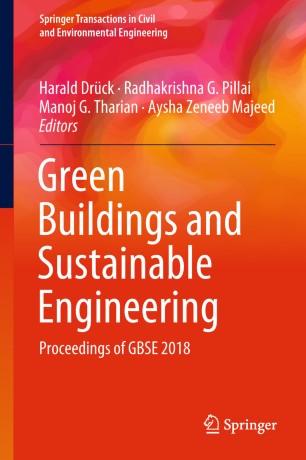 This book comprises the proceedings of the International Conference on Green Buildings and Sustainable Engineering (GBSE 2018), which focused on the theme “Transforming our Built Environment through Innovation and Integration towards a Smart and Sustainable Future”. The papers included address all aspects of green buildings and sustainability practices in civil engineering, and offer a valuable reference resource for researchers, practitioners, and policy makers.

Dr.-Ing. Harald Drück is a Mechanical Engineer who has been working at the Institute for Thermodynamics and Thermal Engineering (ITW), University of Stuttgart for more than 20 years. Since 1999 he has been the Head of the Research and Testing Centre for Solar Thermal Systems (TZS). His main research interests lie in the field of solar thermal technology, focusing on advanced heating and cooling systems, thermal energy storage and the development of performance testing methods as well as energy efficient solar buildings. Harald Drück has authored or co-authored around 300 publications in the field of solar thermal energy and heat storage. He is convenor of several German and European working groups related to the standardisation and testing of solar thermal systems and components, such as the Solar Keymark Network, the Global Solar Certification Network and the Solar Certification Fund. He acts as an advisor to several high-level international organisations, is chairman or member of the scientific board of several conferences and workshops and teaches a highly successful postgraduate course on solar thermal energy at the University of Stuttgart. Furthermore he was one of the initiators of the German and European Solar Thermal Technology Platforms and is currently a member of the steering committees of both platforms. In addition to his activities at the University, he is the Director of SWT – Solar- und Wärmetechnik Stuttgart. SWT is a spin-off company of ITW and is a service provider in the field of solar thermal energy.

Dr Radhakrishna G. Pillai is an Associate Professor at the Department of Civil Engineering, Indian Institute of Technology, Madras. After completing his MS and PhD in Civil Engineering at Texas A&M University, he worked as a postdoctoral researcher at Texas A&M Transportation Institute and Oregon State University’s School of Civil and Construction Engineering, before joining IIT Madras. His research interests include the repair and rehabilitation of concrete structures, monitoring and prevention of corrosion and development of methods to test for corrosion. He has published numerous research papers in international journals and conferences, co-authored research reports and served as an editor for a number of conference proceedings.

Dr. Manoj G Tharian is working as Associate Professor at the Mechanical Engineering Department of Rajagiri School of Engineering & Technology (RSET). He completed his B.Tech. in Mechanical Engineering at the Government Engineering College, Trichur in 1995. He worked as Project Associate in the Ocean Engineering Department, IIT Madras for a short period, before completing his postgraduate diploma in Marine Engineering at the Marine Engineering Research Institute, Mumbai in 1997. He has six years of experience as a marine engineer and worked with Chevron Shipping Company, San Francisco and Anglo Eastern Ship Management, Hong Kong in the capacities of Junior Engineer, 3rd Assistant Engineer and 2nd Assistant Engineer on merchant ships from 1997 to 2003. In addition he has fourteen years of teaching experience. He completed his Masters Degree in Computer Aided Structural Analysis and Design and Ph.D. at the Department of Ship Technology, Cochin University of Science and Technology. He has also taught classes for postgraduate students at the university.

Dr. Aysha Zeneeb Majeed is currently Associate Professor at RSET where she has been working since 2005. She has been in the field of teaching since 2003 and worked as a structural design consultant for two years prior to teaching. Ms. Zeneeb obtained her B.Tech. (Civil Engineering) from REC Calicut in 1999, with a proficiency award in academics and obtained her M.Tech. degree (Construction Engineering & Management) from CUSAT in 2009. She completed her Ph.D. (Structural Engineering) at IIT Madras.