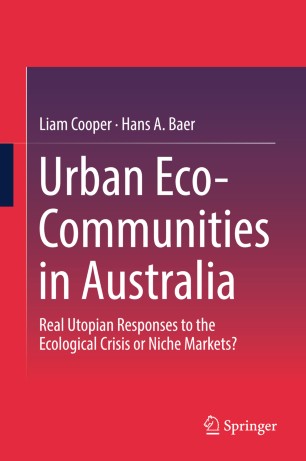 Real Utopian Responses to the Ecological Crisis or Niche Markets?

This book offers one of the first detailed anthropological studies of emergent ecotopianism in urban contexts. Engaging directly with debates on urbanisation, sustainability and utopia, it presents two detailed ethnographic case studies of inner urban Australian eco-communities in Adelaide and Melbourne. These novel responses to the ecological crisis – real social laboratories that attempt to manifest a vision of the ‘eco-city’ in microcosm – offer substantial new insights into the concept and creation of sustainable urban communities, their attempts to cultivate ways of living that are socially and ecologically nourishing, and their often fraught relationship to the capitalist city beyond. These studies also suggest the opportunities and limitations of moving beyond demonstration projects towards wider urban transformation, as well as exposing the problems of accessibility and affordability that thwart further urban eco-interventions and the ways that existing projects can exacerbate issues of gentrification and privilege in a socially polarised city. Amidst the challenges of the capitalist city, climate change and ecological crisis, this book offers vital lessons on the potential of urban sustainability in future cities.

Liam Cooper is an independent scholar with a PhD in Anthropology from the University of Melbourne.  He has worked in the financial, government and community sectors and has conducted research in housing and sustainability at a number of non-government organisations.  Liam's research interests span the fields of urban and environmental anthropology, cultural ecology and human geography.
Hans A. Baer is a Principal Honorary Research Fellow and Associate Professor in the School of Social Political Sciences, the University of Melbourne. Hans has published some 20 books and 190 book chapters and articles on topics including Mormonism, African-American religion, socio-political life in East Germany, critical health anthropology, medical pluralism in the US, UK, and Australia, the critical anthropology of climate change and Australian climate politics. His books include Global Warming and the Political Ecology of Health (with Merrill Singer, 2009), Global Capitalism and Climate Change (2012), Climate Politics and the Climate Movement in Australia (with Verity Burgmann, 2012),  The Anthropology of Climate Change (with Merrill Singer, 2014) and Democratic Eco-Socialism as a Real Utopia (2018). Hans earned his PhD in Anthropology at the University of Utah and has taught at several US colleges and universities, at Humboldt University in East Berlin as a Fulbright Lecturer and at the Australian National University.