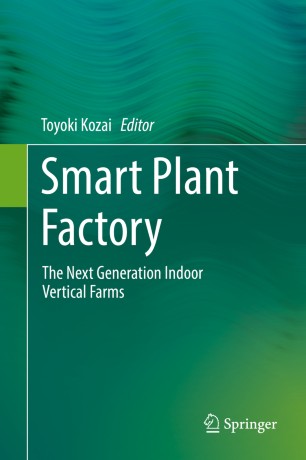 The Next Generation Indoor Vertical Farms

The third wave of PFAL business started in around 2010 in Japan and Taiwan, and in USA and Europe it began in about 2013 after the rapid advances in LED technology. The book discusses the basic and advanced developments in recent PFALs and future smart PFALs that emerged in 2016.

There is an emerging interest around the globe in smart PFAL R&D and business, which are expected to play an important role in urban agriculture in the coming decades. It is also expected that they will contribute to solving the trilemma of food, environment and natural resources with increasing urban populations and decreasing agricultural populations and arable land area.

Current obstacles to successful PFAL R&D and business are: 1) no well-accepted concepts and methodology for PFAL design and management, 2) lack of understanding of the environmental effects on plant growth and development and hydroponics among engineers; 3) lack of understanding of the technical and engineering aspects of PFAL among horticulturists; 4) lack of knowledge of the technical challenges and opportunities in future PFAL businesses among business professionals, policy makers, and investors and 5) lack of a suitable textbook on the recent advances in PFAL technologies and business for graduate students and young researchers. This book covers all the aspects of successful smart PFAL R & D and business.

Professor Kozai obtained a BS degree in Horticultural Sciences from Chiba University, and Master and Doctoral degrees in Agricultural Engineering from the University of Tokyo. When he started his academic career in 1973 as an agricultural engineer, his work was focused on greenhouse environment control engineering. After establishing his early work on greenhouse light environments, energy saving, ventilation and computer control, his scientific interest extended to in vitro environment control in plant tissue culture, sugar-free media and photoautotrophic micro-propagation, and plant production in closed systems with artificial lighting. His first paper on plant production using LED was published in the early 1990’s.

He was inaugurated as the President of Chiba University in 2005. He subsequently returned to research and education as a professor emeritus in an endowed chair position at the Center for Environment, Health and Field Sciences, Chiba University, with a special focus on medicinal plant production under controlled environments. From 2010 to 2018, he worked as the President of Japan Plant Factory Association (non-profit organization) and has been leading  the R & D of “plant factory with artificial lighting (PFAL)” for commercial production of plants and “integrative environment control of greenhouses” using heat pump, fogging and null-balance CO2 enrichment systems for hot summer regions.

His awards include: Lifetime Achievement Award (2009) from Society of In Vitro Biology, USA; the 2002 Purple Ribbon Award from Japanese Ministry of Education, Culture and Sports; Japan Prize of Agricultural Sciences from Association of Japanese Agricultural Scientific Societies, and many others.

Publications: He has published more than 200 refereed papers over 50 book chapters and more than 10 books in English.