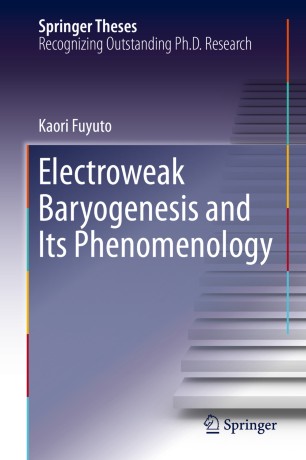 Electroweak Baryogenesis and Its Phenomenology

This thesis focuses on one of the mechanisms for solving the baryon asymmetry of the Universe (BAU) which is a long-standing open question in both particle physics and cosmophysics. Electroweak baryogenesis (EWBG) is one attractive hypothetical scenario to solve this mystery because it can be verified by collider experiments. The author aims to clarify the possibility of EWBG, and to show its verifiability using the Higgs physics and electric dipole moments (EDMs) of an electron, neutron, and proton.

The thesis begins with a review of the BAU and EWBG. Subsequently, the possibility of EWBG in one effective model is discussed, which can be applied to some motivated physics beyond the Standard Model. Numerical analyses of electroweak phase transition and sphaleron solution are presented, and the closed time path formalism is also explained to estimate the BAU. After essential calculations for investigation of the possibility of EWBG, the relationship between the BAU and EDMs is described. Through the discussion of the result, it is concluded that both EDMs and the Higgs physics verify the scenario completely. The whole discussion in this thesis causes us to accept the current situation that is ripe for verification of EWBG.

Kaori Fuyuto, a postdoctoral research associate at the Amherst Center for Fundamental Interactions in the Physics Department at University of Massachusetts Amherst, is a theoretical physicist in particle physics. Her research interests include baryon asymmetry, Higgs physics, and flavor physics.

Kaori Fuyuto received her Bachelor of Arts and Science in Physics from Aichi University of Education in 2011. She then joined the group led by Professor Junji Hisano at the Department of Physics, Nagoya University, and received her Master of Science in Physics and her Ph.D. in Physics from the same university in 2013 and 2016, respectively. After finishing her PhD, she joined the cosmology group at Saga University as a postdoctoral fellow of the Japan Society for the Promotion of Science. She was awarded the “9th Particle Physics Medal: Young Scientist Award in Theoretical Particle Physics” for an article published in 2014.