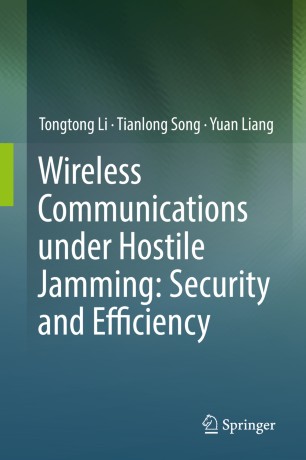 This monograph is intended for the designers and would-be designers of secure and efficient wireless communication systems under intentional interference. Along with the widespread of wireless devices, especially reconfigurable software defined radios, jamming has become a serious threat to civilian communications. In this book, going beyond traditional communication system design that mainly focuses on accurate information transmission under benign environments, we aim to enhance the physical layer security of communication systems by integrating modern cryptographic techniques into transceiver design, so as to achieve secure high-speed transmission under hostile interference with high reliability and efficiency.  We revisit existing jamming patterns, and introduce new jamming patterns. We analyze the weaknesses of existing anti-jamming techniques.  We present innovative and feasible anti-jamming techniques, which can strengthen the inherent security of the 3G, 4G and the upcoming 5G systems with minimal and inexpensive changes to the existing CDMA, frequency hopping and OFDM schemes. We also provide benchmarks for system performance evaluation under various jamming scenarios through capacity analysis.

This book includes design principles, in-depth theoretical analysis and practical design examples, and will be of interest to academic researchers as well as professionals in industry.

Tongtong Li received her Ph.D. degree in Electrical Engineering in 2000 from Auburn University. From 2000 to 2002, she was with Bell Labs, and had been working on the design and implementation of 3G and 4G systems. Since 2002, she has been with Michigan State University, where she is now an Associate Professor. Prof. Li’s research interests fall into the areas of wireless and wired communications, wireless security, information theory, and statistical signal processing, with applications in computational neuroscience. She is a recipient of a National Science Foundation (NSF) CAREER Award (2008) for her research on efficient and reliable wireless communications. In the past, Prof. Li served as an Associate Editor for IEEE Transactions on Signal Processing, IEEE Signal Processing Letters, and an Editorial Board Member for EURASIP Journal Wireless Communications and Networking.

Tianlong Song received his Ph.D. degree in Electrical and Computer Engineering in 2016 from Michigan State University. During his Ph.D. study, he had been working on efficient and secure system design in wireless communications under jamming, as well as brain neuroimaging data mining. Since 2016, he has been with Zillow Inc., where he is now a Big Data Software Development Engineer, and working on big data related study and development. His research interests lie in the areas of secure communications under jamming and big data infrastructure. He is also enthusiastic about machine learning, natural language processing and artificial intelligence.

Yuan Liang received his B.S. degree in Electrical Engineering from Nanjing University of Posts and Telecommunications in 2012, and the M.S. degree in Electrical Engineering from Southeast University in 2015. He is currently working toward his Ph.D. degree in the Department of Electrical and Computer Engineering at Michigan State University. His research focuses on architecture design, performance analysis and resource allocation in heterogeneous wireless networks. He is also highly interested in computational neuroscience, big data, natural language processing and artificial intelligence.