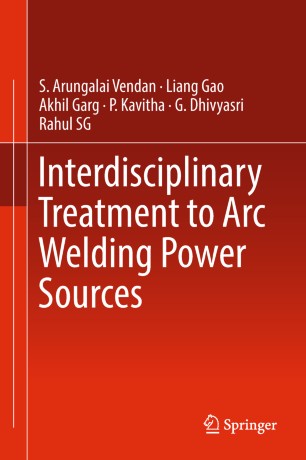 This book presents the fundamentals of arc phenomena, various arc welding power sources, their control strategies, welding data acquisition, and welding optimization. In addition, it discusses a broad range of electrical concepts in welding, including power source characteristics, associated parameters, arc welding power source classification, control strategies, data acquisitions techniques, as well as optimization methods. It also offers advice on how to minimize the flaws and improve the efficacy and performance of welds, as well as insights into the mechanical behavior expressed in terms of electromagnetic phenomena, which is rarely addressed. The book provides a comprehensive review of interdisciplinary concepts, offering researchers a wide selection of strategies, parameters, and sequences of operations to choose from.

Dr. S. Arungalai Vendan is an associate professor at the Industrial Automation and Instrumentation Division, VIT University, Vellore, India. He has been working on advanced welding processes since 2006. He received his Ph.D. degree from the National Institute of Technology (Institute of national importance), Tiruchirappalli, India in 2010. He has received several fellowships and awards for his technical contributions by various government agencies. He has successfully completed government funded research projects and industrial consultancy projects, and has published more than 70 research papers in international journal and conference proceedings.  He has associations with top manufacturing industries and Research and Development centers under various capacities. His research interests mainly focus on the interdisciplinary science which has confluence of terminologies from electrical/mechanical/metallurgical/ materials and magnetic technologies.

Prof. Liang Gao received his Ph.D. degree in Mechatronic Engineering from the Huazhong University of Science and Technology (HUST), Wuhan, China, in 2002. He is currently a professor at the Department of Industrial and Manufacturing System Engineering, School of Mechanical Science and Engineering, HUST and the vice director of the State Key Lab of Digital Manufacturing Equipment & Technology. His chief research interests include optimization in design and manufacturing, and he has published more than 150 academic papers,. He is currently an associate editor for Swarm and Evolutionary Computation and the Journal of Industrial and Production Engineering, and an editorial board member of the European Journal of Industrial Engineering and Operations Research Perspectives.

Dr. Akhil Garg is an associate professor at the Ministry of Education’s Intelligent Manufacturing Key Laboratory, Shantou University, China. He has been working on sustainable manufacturing processes and optimization methods since 2011. He received his doctoral degree from Nanyang Technological University (NTU), Singapore in 2014. He has published over 50 SCI-indexed articles in the areas of manufacturing and optimization.