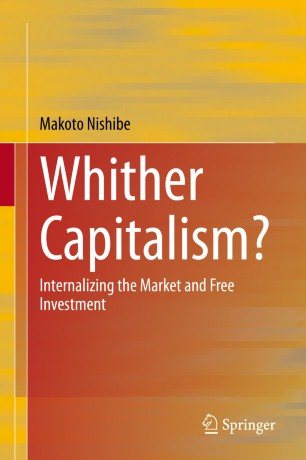 Internalizing the Market and Free Investment

This book is the first to clarify the essential meaning and serious impact of globalization at the most abstract level from the point of view of Polanyi's three socioeconomic principles of exchange, reciprocity and redistribution. It also provides a theoretically coherent explanation of the evolution of the market and capitalist economies with respect to the advancement of commodification through Marx's internalization of the market into the community and state.
Globalization is the long-term tendency of the market to extensively expand and deepen, and of the community and state to contract and become shallower. The ultimate goal of globalization is free investment capitalism for all people – not only capitalists and speculators, but workers, students, and housewives as well.
The book also examines Hayek's criticism of a centrally planned economy and Lange's proposal of market socialism in the “Socialist Calculation” debate, which has been ongoing since the 1920s, and acknowledges Hayek's vision of a distributed market with local and tacit knowledge to explain why socialism is infeasible and capitalism is robust.
The outcomes of globalization are disastrous in socioeconomic, cultural and ecological realms. As such, it argues that in the twenty-first century, a post-capitalist, cooperative market economy mediated by new forms of money as communication media must be achieved. These new media will include community currencies and local exchange trading systems (LETS) that can maintain the merits of money and the market and can overcome the defects of free investment capitalism.
Lastly, this English version of the book includes a postscript explaining the significance and prospects of the socioeconomic changes around the globe since the publication of Japanese version in 2011.