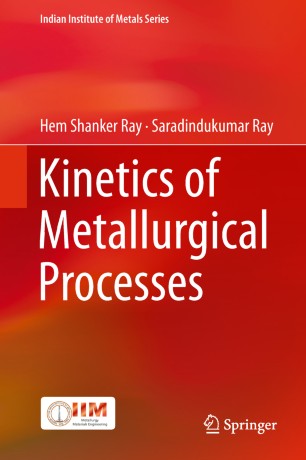 This book is intended as a text for upper undergraduate and graduate courses on kinetics of metallurgical processes for students of materials science, metallurgical engineering, and chemical engineering. Focusing on basic and essential topics, selected from the authors’ teaching and research, it serves as a comprehensive guide to metallurgical kinetics. Chapters 1–10 discuss the “logic” of various kinetics processes, while Chapter 11 explores the systematic analysis of raw rate data generated from controlled experiments. The final chapters illustrate how the fundamental concept of thermal activation is used to describe the kinetics of rate-dependent plastic deformation and creep fracture. With numerous examples, illustrations, and step-by-step tutorials, it is ideally suited for both self-study and classroom use. The examples were selected from research papers to highlight how the topics discussed can be, and are, used to solve real-world technological problems. Providing a comprehensive list of resources for further study, and end-of-chapter review questions to help students test their knowledge, it can be used for university coursework or as a text for professional development courses.

Prof. Hem Shanker Ray obtained his B.Tech. (Hons) degree in Metallurgical Engineering at the Indian Institute of Technology, Kharagpur in 1962, and his Master's degree Master of Applied Science (M.A. Sc.) (1963) and Ph.D. (l966) degrees in Metallurgy at the University of Toronto, Canada.

His areas of interest include thermal analysis, kinetics, extractive metallurgy, energy and R&D administration, and he has published about 450 papers in reviewed journals and conference proceedings, 7 textbooks, 5 popular-science and other books and some 60 popular science articles. He has also edited 14 conference proceedings and written 50 technical reports as well as numerous non-technical articles, editorials, and fiction works in English and Bengali. He holds several patents including 2 in the U.S.

Prof. Ray has received several awards in recognition of his work, including the National Metallurgists Day Award, G.D. Birla Award and 2 Kamani Gold Medals from the Indian Institute of Metals (IIM). Recently, he was conferred honorary membership of the IIM, and received the Distinguished Alumnus Award from I.I.T. Kharagpur in 2014. He has worked for several companies and R&D laboratories as a consultants or member of boards/research councils, and is associated with several professional bodies and was president of the Indian Institute of Mineral Engineers and Indian Thermal Analysis Society. He is a vice president of the Indian Association for Productivity, Quality & Reliability, Kolkata, president of the Millennium Institute of Energy and Environment Management and editor of several journals. He was honorable director of Ramakrishna Vivekananda Mission Institute of Advanced Studies and president of CSIR Pensioners Welfare Society (CPWSc), Kolkata.

Dr. Saradindukumar Ray, B.E. (1968), Ph.D. (1985) served the Department of Atomic Energy during 1972–2007, and was head of the Materials Technology Division, Indira Gandhi Centre for Atomic Research from 1998. During September 2010 to May 2017, he served as the Ministry of Steel Chair Professor, Metallurgical & Materials Engineering Department, Jadavpur University. His areas of research interest are deformation and fracture, deformation processing and welding metallurgy. He served as the chief editor of the Transactions of the Indian Institute of Metals from 1996 to 2003. He is a recipient of the National Metallurgist’s Day Best Metallurgist Award, and MRSI Lecture Medal from the Materials Research Society of India. He is a fellow of the Indian National Academy of Engineering, fellow (life) of the Indian Institute of Metals, and a member of several other professional societies connected with materials research and development. He has published more than 100 research papers in various journals and peer-reviewed conference proceedings and made numerous contributions in the form of keynote lectures, invited papers, technical presentations and reports.