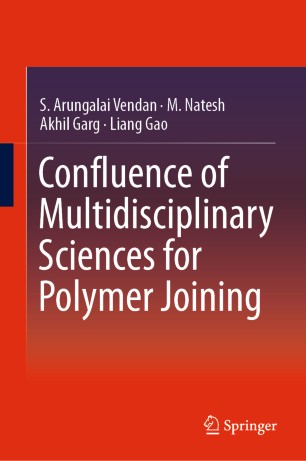 This book offers a systematic overview of polymer joining and highlights the experimental and numerical work currently being pursued to devise possible strategies to overcome the technical issues. It also covers the fundamentals of polymers, the corresponding joining processes and related technologies. A chapter on the extrapolation of finite element analysis (FEA) for forecasting the deformation and temperature distribution during polymer joining is also included. Given its breadth of coverage, the book will be of great interest to researchers, engineers and practitioners whose work involves polymers.

Dr. S. Arungalai Vendan is an associate professor at the Industrial Automation and Instrumentation Division, VIT University, Vellore, India. He has been working on advanced welding processes since 2006. He received his Ph.D. degree from the National Institute of Technology, Tiruchirappalli, India in 2010. He has successfully completed several government funded research projects and industrial consultancy projects, and has published more than 70 research papers in international journal and conference proceedings. His research interests mainly focus on the interdisciplinary confluence of electrical/mechanical/metallurgical/ materials and magnetic technologies.

Mr. M. Natesh is a research associate at the Department of Mechanical Engineering, VIT University, Vellore, India. He has been exploring the research potentials of advanced manufacturing methods for engineering materials since 2009. He has been involved in developing mathematical/numerical modeling for parametric assessments, and has contributed to the development of prototype experimental models. Currently, he is pursuing research on polymer joining involving an interdisciplinary hybrid mechanism.

Dr. Akhil Garg is an Associate Professor at Intelligent Manufacturing Key Laboratory of Ministry of Education, Shantou University, China. He has been working on sustainable manufacturing processes and optimization methods since 2011. He received his doctoral degree from Nanyang Technological University (NTU), Singapore in 2014. He has published over 50 SCI-indexed articles in the areas of manufacturing and optimization.

Prof. Liang Gao received his Ph.D. degree in mechatronic engineering from Huazhong University of Science and Technology (HUST), Wuhan, China, in 2002. He is currently a professor at the Department of Industrial and Manufacturing System Engineering, School of Mechanical Science and Engineering, HUST and the vice director of the State Key Lab of Digital Manufacturing Equipment & Technology. Having published more than 150 academic papers, his chief research interests include optimization in design and manufacturing. He currently serves as an associate editor for Swarm and Evolutionary Computation and the Journal of Industrial and Production Engineering, and as an editorial board member of the European Journal of Industrial Engineering and Operations Research Perspectives.