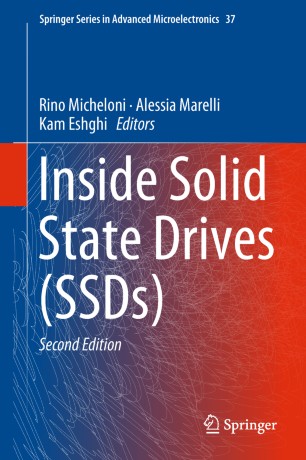 Updated throughout to include all recent work in the field, significant changes for the new edition include:

The SSD market is booming, with many industries placing a huge effort in this space, spending billions of dollars in R&D and product development. Moreover, flash manufacturers are now moving to 3D architectures, thus enabling an even higher level of storage capacity. This book takes the reader through the fundamentals and brings them up to speed with the most recent developments in the field, and is suitable for advanced students, researchers and engineers alike.

Dr. Rino Micheloni (rino.micheloni@ieee.org) is Vice-President and Fellow at Microsemi Corporation, where he currently runs the Flash Signal Processing Labs in Milan, Italy, with special focus on NAND Flash, Error Correction Codes, and Machine Learning. Prior to joining Microsemi, he was Fellow at PMC-Sierra, working on NAND Flash characterization, LDPC, and NAND Signal Processing as part of the team developing Flash controllers for PCIe SSDs. Before that, he was with IDT (Integrated Device Technology) as Lead Flash Technologist, driving the architecture and design of the BCH engine in the world’s first PCIe NVMe SSD controller. Early in his career, he led NAND design teams at STMicroelectronics, Hynix, and Infineon/Qimonda; during this time, he developed the industry’s first MLC NOR device with embedded ECC technology and the industry’s first MLC NAND with embedded BCH.

Dr. Micheloni is IEEE Senior Member, he has co-authored more than 70 publications, and he holds 278 patents worldwide (including 131 US patents). He received the STMicroelectronics Exceptional Patent Award in 2003 and 2004, and the Infineon/Qimonda IP Award in 2007.

Alessia Marelli is technical leader at Microsemi Corporation, where she takes care of the Error Correction Code and Machine Learning algorithms. She joined Microsemi from PMC-Sierra where she was part of the NAND characterization team as senior engineer with a special focus on Data Analysis and Flash Management algorithms. Before that, she was with IDT as senior designer working on ECC solutions for Flash controllers. Prior IDT, she worked in Qimonda/Infineon as digital designer and in STMicroelectronics defining the Error Correction Code for the industry’s first MLC NAND with embedded BCH. She received her degree in Mathematical Science from “Università degli Studi di Milano – Bicocca”, Italy in 2003 with a thesis about ECC applied to Flash Memories.

Previously, as Sr. Director of Marketing & Business Development at Integrated Device Technology (IDT) Kam build IDT’s NVMe Controller business from startup to industry leader. That business was then sold to PMC and is today a successful product line at Microsemi. Earlier in his career, Kam helped build product lines in storage, compute and networking markets at HP, Intel, Crosslayer Networks, and Synopsys.

Kam has a M.S. in Electrical Engineering & Computer Science and a Master of Business Administration, from Massachusetts Institute of Technology and U.C. Berkeley, respectively.