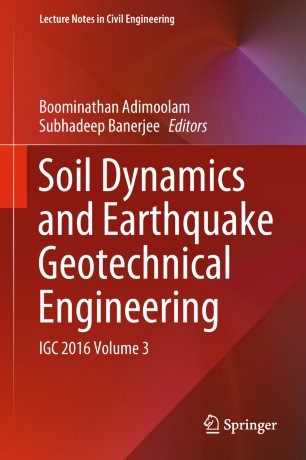 This book gathers selected proceedings of the annual conference of the Indian Geotechnical Society, and covers various aspects of soil dynamics and earthquake geotechnical engineering. The book includes a wide range of studies on seismic response of dams, foundation-soil systems, natural and man-made slopes, reinforced-earth walls, base isolation systems and so on, especially focusing on the soil dynamics and case studies from the Indian subcontinent. The book also includes chapters addressing related issues such as landslide risk assessments, liquefaction mitigation, dynamic analysis of mechanized tunneling, and advanced seismic soil-structure-interaction analysis. Given its breadth of coverage, the book offers a useful guide for researchers and practicing civil engineers alike.

Professor A. Boominathan received his Ph.D. in Soil Dynamics from Moscow Civil Engineering Institute in 1986. He worked as a CSIR Scientific Pool Officer at the Ocean Engineering Centre, Indian Institute of Technology (IIT) Madras in 1987. Since 1988, he has been a faculty member of the Geotechnical Engineering Division at the Indian Institute of Technology Madras. His fields of specialization include Soil Dynamics and Earthquake Engineering, Foundation Engineering, and Ground Improvement. Dr. Boominathan has long since been actively involved in the area of site-specific seismic hazard assessment, which includes seismological, geophysical and geotechnical considerations. He has completed nine sponsored research projects worth roughly Rs. 1.5 crores and is currently coordinating major research projects funded by the Ministry of Earth Sciences of Government of India and the Nuclear Power Corporation of India (NPCIL), Mumbai in the area of Seismic Soil-Structure Interaction and Base Isolation using Geo-Isolators. He has authored and co-authored over 130 scientific papers, and serves as an editorial board member of Journal of Earthquake & Tsunami, International Journal of Earthquake Geotechnical Engineering and ISET Journal of Earthquake Technology. He was part of a working group of experts in the Geohazards program of the National Disaster Management Authority (NDMA), Government of India. He received the IGS-Shri M.S. Jain Biennial Prize in 2004 and IGS-Prof. C.S. Desai Biannual Prize in 2012.

Dr. Subhadeep Banerjee is an Associate Professor of Geotechnical Engineering at the Department of Civil Engineering, Indian Institute of Technology, Madras. He received his Ph.D. in Civil Engineering from the National University of Singapore. His research interests include cyclic behavior of geomaterials, seismic soil-structure interactions, and finite element analysis of complex dynamic problems. In addition, he is an expert for constitutive modeling of soils, with a special focus on transient dynamic behavior. At the IIT Madras, he has formed three research groups to study the following attributes: (i) Cyclic characterization of various types natural soils, improved ground, landfills etc., (ii) Development of constitutive models of soils, with an emphasis on their performance under seismic loadings, and (iii) Application of fundamentals of dynamics to various complex soil-structure problems such as tunneling, base isolation techniques, plate anchors, retaining walls etc.