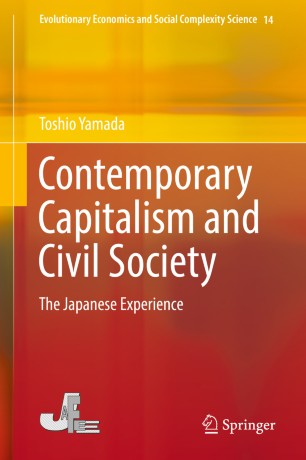 This book is devoted to analyzing contemporary capitalism both in Japan and in the world economy by using the theoretical framework of the French régulation theory and by revisiting the theory of civil society in postwar Japan. The Japanese theory of civil society proposed unique thinking about “freedom and equality” and “human rights” in the postwar era but could not help to come up with effective concepts for an economic analysis of that capitalism of the period. On the other hand, the régulation theory born in the 1970s is well known by its definition of postwar capitalism as Fordism, based on the elaboration of a new conceptual framework, but it soon proved unable to directly explain Japan’s experience by that central concept of Fordism. Inspired by consideration of Japanese civil society and also by the regulationist framework, the author has forged new analytical concepts such as “companyism” to understand Japanese capitalism including the recent “lost decades”, and he elaborates more carefully the concepts of “growth regime” and “institutional change” to grasp the dynamics of the world economy including today’s neoliberal trend. The original benefits of the book consist in 1) reviving a Japanese theory of civil society in the postwar period, 2) applying the régulation theory to the analysis of contemporary Japan, and 3) offering theoretical reflections on the conception of the world economy. Consequently, the author pays special attention to the relationship between the political and the economic as well as regulationist tools and the theory of civil society’s perspective. The principal message of the book is that capitalism or the market economy must be supported by a sound civil society.