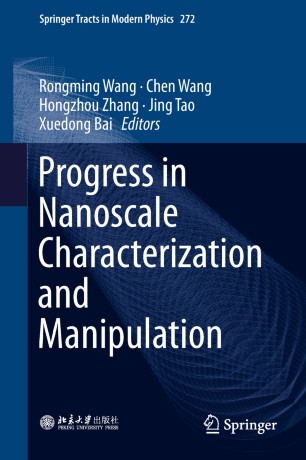 Progress in Nanoscale Characterization and Manipulation

This book focuses on charged-particle optics and microscopy, as well as their applications in the materials sciences. Presenting a range of cutting-edge theoretical and methodological advances in electron microscopy and microanalysis, and examining their crucial roles in modern materials research, it offers a unique resource for all researchers who work in ultramicroscopy and/or materials research.
The book addresses the growing opportunities in this field and introduces readers to the state of the art in charged-particle microscopy techniques. It showcases recent advances in scanning electron microscopy, transmission electron microscopy and helium ion microscopy, including advanced spectroscopy, spherical-corrected microscopy, focused-ion imaging and in-situ microscopy. Covering these and other essential topics, the book is intended to facilitate the development of microscopy techniques, inspire young researchers, and make a valuable contribution to the field.

Rongming WANG received his Bachelor and Master’s Degrees in Physics from Peking University and Ph. D. in Materials Science from Beijing Institute of Aeronautical Materials, China. In 2004-2005, he was a visiting scholar in University of California, Berkeley. Then he joined Beihang University as a Professor in physics. Currently, he is a professor in University of Science and Technology Beijing and director of Beijing Key Laboratory for Magneto-Photoelectrical Composite and Interface Science. His research interests include magnetic nanomaterial, transmission electron microscopy and interface science.

Prof. Rongming Wang has published over 200 articles including Phys. Rev. Lett., Adv. Mater., J. Am. Chem. Soc., Angew. Chim. Int. Edit., Nano Lett. etc. and presented over 60 invited talks in international and national conferences, universities and institutes. The papers have been cited over 6,000 time citations by SCI journals and citation H factor of 43. He has won several awards including National Prize for Natural Sciences, Scientific Chinese Prize for People of the Year 2012, State Council Expert for Special Allowance, etc.

Chen Wang received his B.S. degree from University of Science and Technology of China in 1986. After obtaining PhD degree from University of Virginia in 1992, he joined Arizona State University as a postdoctoral associate. In 1994, he became a professor of Central China Normal University. He was a faculty of the Institute of Chemistry, Chinese Academy of Sciences from 1995 to 2004, and is currently a professor of National Center for Nanoscience and Technology of China.

Research in the Wang’s group focuses on many aspects of surface physical chemistry and nano-bio interface, including the principle of scanning tunneling microscopy and its applications, nanoscale physical and chemical phenomena at interface, and molecular self-assembly, and single molecule physics and chemistry, etc. Wang and his collaborators have engaged in constructing low-dimensional molecular nanostructures on surfaces through multilevel self-assembling processes. Such multilevel process can be categorized depending on symmetry characteristics and nature of intermolecular interactions.

In recent years, his group has engaged in studying molecular mechanisms of peptide assemblies relating to disease diagnosis and treatment techniques. In the recent studies, the fine folding and assembling characteristics of amyloid peptides at the level of single molecules are being pursued. The insight of the assemble peptide and protein structures could provide basis for developing diagnosis and therapeutics for neurodegenerative diseases.

Hongzhou ZHANG received his Bachelor and Master’s degrees in Physics at Peking University (China) and PhD in Applied Physics at Rice University (US) in 1999. He worked as a Research Fellow at the Australian National University for three years before he joined Trinity College Dublin (TCD) in 2009. He is now an Associate Professor at the School of Physics, TCD and a Principal Investigator at CRANN/AMBER, the Irish national nanoscience centre. His research is focused on the applications of helium-ion microscopy in nanomaterial imaging and modification and he is recognized internationally as a pioneering researcher in the field (h-index: 30; total citation counts 4405). Since 2009, he has secured 15 research projects from diverse Irish and EU funding agencies and industries.

Jing Tao received her B. S. in Physics at Peking University in 1997. She carried out her Masters research at Arizona State University and conducted her PhD research at University of Illinois at Urbana-Champaign. After received the PhD in 2005, she moved to Oak Ridge National Laboratory as a postdoctoral researcher. Dr. Tao is now a physicist working in Condensed Matter Physics & Materials Science Department of Brookhaven National Laboratory, sponsored by US Department of Energy (DOE). Dr. Tao has been working on the structure-property relationship in strongly correlated systems and functional nanomaterials with over 70 publications. Dr. Tao is a recipient of DOE Early Career Award for the project of “Tracing non-equilibrium phenomena in correlated materials by using ultrafast electron probes” in May 2015.

Xuedong Bai is a professor at Institute of Physics, Chinese Academy of Sciences (CAS). He graduated in physics from Northeast Normal University (1990) and obtained his PhD in materials science and engineering from Institute of Metal Research, CAS (1999). He did his research in National Institute of Material Science (NIMS), Japan (2004-2005) as a visiting professor and worked at Georgia Institute of Technology (2001-2003) as a post-doctoral fellow. Xuedong Bai researches low-dimensional materials physics, the approach is in-situ transmission electron microscopy (TEM), in a way that it can directly correlate the atomic-scale structure with physical and chemical properties by a combination of scanning tunneling microscopy (STM) and TEM. This study primarily involves nanomanipulation and nanomeasurements of intrinsic properties of low-dimensional nanostructured materials. Recently, the solid-state ionic transport is also probed driven by the operation mechanism of energy, catalysis and information devices. In the above fields, he is the co-author of over 150 papers in peer-reviewed journals (2 in Nature, 5 in Nature serials, 2 in PNAS, 10 in JACS, 27 in APL, 8 in Nano Lett., and 5 in Adv. Mater.) and co-inventor on 11 patents. He delivered over 50 keynote/invited talks including MRS and AVS congress. Dr. Bai’s H-index is 44 with over 7000 citations. Xuedong Bai was named a number of academic awards, including National 10000 Talent Program Scientists (2016), Hu Gang-Fu Physics Award (Chinese Physics Society, 2015), the 2nd Place of the National Science and Technology Award (2011), the 1st Place of the Science and Technology Award of Beijing (2008), and Outstanding Young Research Foundation (NSFC, 2007) etc.