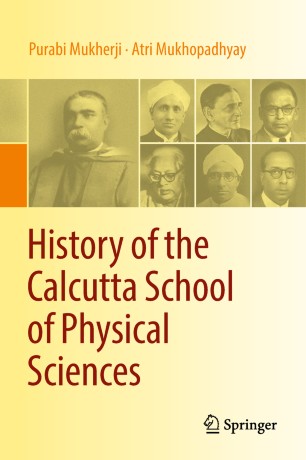 History of the Calcutta School of Physical Sciences

This book highlights the role of Sir Asutosh Mookerjee, founder of the Calcutta school of physics and the Calcutta Mathematical Society, and his talented scholars – Sir C.V. Raman, D.M. Bose, S.N. Bose, M.N. Saha, Sir K.S. Krishnan and S.K. Mitra – all of whom played a significant role in fulfilling their goal of creating an outstanding school of physical sciences in the city of Calcutta. The main objective of the book is to bring to the fore the combined contributions of the greatest physicists of India, who in the colonial period worked with practically no modern amenities and limited financial resources, but nonetheless with total dedication and self-confidence, which is unmatched in today’s world. The book presents the golden age of the physical sciences in India in compact form; in addition, small anecdotes, mostly unknown to many, have been brought the forefront.
The book consists of 10 chapters, which include papers by these distinguished scientists along with detailed accounts of their academic lives and main research contributions, particularly during their time in Calcutta. A synopsis of the contents is provided in the introductory chapter. In the following chapters, detailed discussions are presented in straightforward language. The complete bibliographies of the great scientists have been added at the end. This book will be of interest to historians, philosophers of science, linguists, anthropologists, students, research scholars and general readers with a love for the history of science.

Purabi Mukherji has been a counsellor in Mathematics at the Indira Gandhi National Open University (IGNOU), Kolkata centre, India, since 1994. Earlier, she served in the Department of Mathematics at the Gokhale Memorial Girls’ College, Kolkata, from 1994 to 2014. Dr Mukherji earned her PhD in Applied Mathematics from Jadavpur University, Kolkata, in 1987. She received two “National Best Paper Awards” for her work on “Mathematical Modelling” in Geophysics, awarded by the Indian Society for Earthquake Technology of the University of Roorkee. Since 2010, she has been pursuing research in the field of History of Science and has successfully completed two projects funded by the Indian National Science Academy (INSA), New Delhi. Currently, she is working on another INSA-funded project entitled “The Development of the School of Research on Number Theory in India During the 20th Century”. She has published over 40 research papers in reputed national and international journals and over 20 scientific articles in Bengali popular scientific magazines. She authored a book titled Pioneer Mathematicians of Calcutta University published by the Calcutta University Press, Kolkata. Dr Mukherji is a life member of the Indian Science Congress Association, Calcutta Mathematical Society, Indian Society of History of Mathematics, Indian Society of Exploration Geophysicists, Indian Society of Nonlinear Analysts and many others. She is also an editorial board member of the journal Indian Science Cruiser published by the Institute of Science, Education and Culture (ISEC), Kolkata.
Atri Mukhopadhyay is a retired professor of Saha Institute of Nuclear Physics, Kolkata, India. He earned his PhD in Physics from the University of Calcutta, Kolkata. He was responsible for restructuring and enriching the Meghnad Saha Archives at the Saha Institute of Nuclear Physics, Kolkata. His book entitled Abinash Meghnad Saha (Meghnad Saha the Invincible) in Bengali offers an in-depth analysis of the life and work of Meghnad Saha vis-à-vis the contemporary scientists in colonial India. He was the general secretary of the Indian Physical Society for several consecutive terms and has authored quite a number of articles in English and Bengali, including a classical Indian text on Mahabharata, and has published 40 research papers in international journals. He translated T.S. Eliot’s The Waste Land into Bengali. His research has primarily been on the electron structure theory of atoms and molecules.

“The aim of the book is to provide short accounts of the lives and works of the physicists covered in the book – based primarily on the previous historical accounts of these physicists. … scholars as well as general readers will find this book useful as a source of basic information about the important Indian physicists of that era between the two covers of one single book.” (Arnab Rai Choudhuri, Current Science, Vol. 117 (11), December, 2019)

“This hardback, a labour of love of Purabi Mukherji and Atri Mukhopadhyay have not dwelt with the drama which this band of talented men had to face as they rowed upstream. That is why this Springer publication is a better read than run of the mill works on these men. Instead of drama, the authors have focused on scientific information which never descends to the level of jargon. Anyone with a love for the history of science will treasure it.” (The Statesman, thestatesman.com, January, 28, 2019)

“This book is a comprehensive, sensitive and balanced collection of review, analysis and critique of the lives and work of the giants in physical sciences who appeared in the golden renaissance era of Bengal in the early twentieth century. The style and indeed the composition of the authors, Purabi Mukherjee and Atri Mukhopadhyay, is engaging, almost racy, if not brilliant. The book keeps the reader wanting to know more. The meticulous research done by the authors is unique in today’s world. Having read it from the beginning to the end, the reviewer has found no obvious mistake.” (Prof Bikash Sinha, INSA Honorary Scientist & Former Homi Bhabha Professor, DAE, Former Director, Saha Institute of Nuclear Physics & Variable Energy Cyclotron Centre)

“This book is an excellent compilation of short biography of the major scientific personae who were instrumental in ensuring the cherished dream of Sir Ashutosh Mukherjee to establish the science education in India through the University of Calcutta against all odds posed by the then British rulers. The true nationalist fervour and the dedication and great scientific spirit reflected in the works of these great men showed how Sir Ashutosh himself being of the great scholarly bent of mind could gather all these men and established a University of great repute. The narration of the individual excellence reflected in the works of each of these stalwarts who curved their name with glory internationally is replete with nuggets of information which reflects the painstaking care that has gone into the writing of this book… This book is a collection of gems and should be considered as a must-read for anyone who would like to be acquainted with the glory of Indian Science that lit up our Renaissance.” (Prof. Ashoke Ranjan Thakur; Vice Chancellor, Sister Nivedita University, West Bengal, India)

“It is rare to find well-researched books on the historical development of sciences in India in the modern period. It is very necessary to have such books to record the progress of science in the country, to assess its impact, and to derive the inspiration, it can provide on the future progress in science in the country. It is particularly important to disseminate such accounts of science among the student population in the country. The book gives a very lucid, useful and informative account of the Calcutta school of Physical Sciences. The authors have to be commended for bringing out this book.” (Prof. M.S. Sriram, Former Professor and Head, Department of Theoretical Physics, University of Madras, Guindy Campus, Tamil Nadu, India)

“I had a chance to look at the preview of the book, History of the Calcutta School of Physical Sciences. From a limited truncated reading of the book, I understood the rich content of the book, containing the pioneer role played by Ashutosh Mukherjee in establishing the School of Physics as well as the personal achievement of different scientists of the golden era of Calcutta School of Physical Sciences. I am definite that the book will be of great demand in the Indian scientific community and historians of science.” (Prof. S.C. Roy, Formerly Professor and Chairman, Department of Physics, Bose Institute, Kolkata, West Bengal, India)